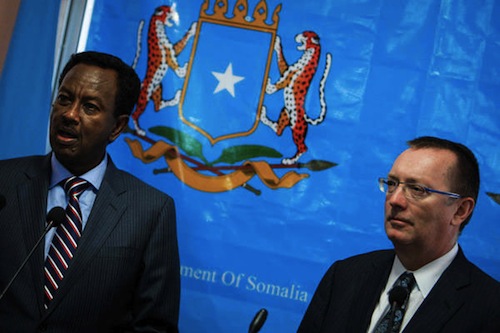 The top United Nations political official stressed that Somalia is entering a new chapter in its history, and reiterated the world body’s commitment to support efforts to build lasting peace, during a visit to the capital, Mogadishu.

“Somalia is beginning to undergo profound transformation,” said Under-Secretary-General for Political Affairs Jeffrey Feltman. “The United Nations will continue to assist however possible at this critical time.”

After decades of factional fighting and lawlessness, the East African country has been undergoing a peace and national reconciliation process, with a series of landmark steps last year that have helped to bring an end to its nine-year political transition period. These steps included the adoption of a Provisional Constitution, the establishment of a new Parliament and the appointments of a new President and a new Prime Minister.

During his visit, Mr. Feltman met with senior Government officials, including Prime Minister Abdi Farah Shirdon, and the Speaker of the Somali Parliament, Mohamed Osman Jawari.

He also met with members of the UN country team and UN staff serving in Mogadishu.

“I was inspired and encouraged by what I heard today from the Somali authorities,” Mr. Feltman said. “This is a Government which has both vision and a practical plan to implement it. They have truly taken ownership of the process and our role is to do our utmost to support the Somali authorities, across the board and without hesitation.”

Mr. Feltman’s visit follows the announcement by Secretary-General Ban Ki-moon at the African Union (AU) summit in Addis Ababa, Ethiopia, over the weekend that he would be proposing to the Security Council the establishment of a new UN peacebuilding presence in Somalia, as part of efforts to strengthen the UN-AU partnership on the ground.

In his meetings, Mr. Feltman encouraged dialogue and reconciliation and expressed concerns over human rights, particularly sexual violence against women, and urged the Government to take the necessary steps to strengthen the promotion and protection of human rights. The discussions also focused on the future of the UN presence in Somalia and the need for a better coordinated and coherent approach by the international community to support this new phase of peacebuilding.