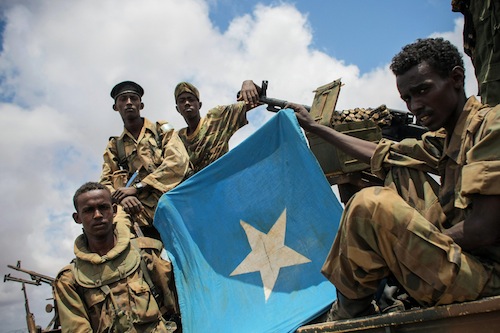 With the nine-year-old transitional period in Somalia having ended peacefully, the authorities need urgent assistance to meet the challenges associated with peacebuilding as well as stabilizing areas liberated from insurgents, the top United Nations envoy to the country said.

“The change met the expectations of most Somalis and has raised higher expectations for more change,” the Secretary-General’s Special Representative and head of the UN Political Office for Somalia (UNPOS), Augustine P. Mahiga, told a Security Council meeting on Somalia.

Briefing the 15-member body via video-conference, Mr. Mahiga added that the Somali authorities now urgently need assistance to meet new challenges. Among the priority tasks facing the new administration is to move quickly to lead in the stabilization of the liberated areas.

“This is critical in filling the vacuum which could otherwise emerge from the retreat of the insurgents,” the envoy said. “The immediate challenge which the Government faces is, hence, the establishment of local and district administrations, justice and rule of law, as well as to provide basic services to the population.”

He noted that the security situation in Somalia has “vastly improved,” thanks to the continuing efforts of the UN-supported African Union Mission in Somalia (AMISOM), the Ethiopian forces and the Somali Government and its local allied forces.

“The fall of Kismayo, the last stronghold of the extremist Al-Shabaab insurgents, in late September, marked a decisive turning-point in the conflict,” he stated, referring to the southern port city that was liberated by AMISOM. “The challenge now is to align the security and political strategies in Kismayo as part of the overall stabilization strategy in the newly-recovered areas.”

Although the Al-Shabaab has now dispersed into a “rag-tag militia,” it has nonetheless, embarked on more asymmetrical, terrorist and hit-and-run tactics as it occasionally does in Mogadishu, said the UN official.

“These are tactics which AMISOM and the Somali forces must be equipped to deal with, as they control more territory and their lines of supply get extended. Another worrying trend is the ongoing assassinations and targeted killings of civilians,” Mahiga said. “These trends call for the expeditious deployment of AMISOM to its full strength, with the necessary logistical support and the enhanced training and strengthening of the Somali Security Forces.”

It is also essential that AMISOM – the current mandate for which expires on 31 October – is supported to control more effectively the coastal waters around Mogadishu, Marka, Baraawe and Kismayo, in order to protect its own forces, supply lines, interrupt Al-Shabaab re-supply lines and effectively secure the ports for commercial use, Mahiga added.

The African Union (AU) has informed the Council that, working together with the UN, it intends to undertake a thorough assessment of AMISOM and how best it can contribute to the stabilization of Somalia in light of the gains made on the ground and the challenges ahead. This process is expected to start in the next few weeks and to be concluded in the coming months.

In the meantime, the AU has requested that the Council authorize a technical rollover of the current support package for AMISOM for four additional months, until February 2013, with some slight adjustments “to take into account pressing issues on the ground,” according to a letter before the Council.

This includes requests for the deployment of an additional 50 civilian personnel across the Mission area, as well as a maritime component, taking into consideration “the critical role of naval assets for the effective implementation of the AMISOM mandate and the stabilization of Somalia.”

Mahiga said that UNPOS had begun a consultative process to review the future presence of the UN in Somalia, and that this would be led by the needs and expectations of the Somalis. He added that the political and security strides that Somalia has made must not distract the international community from the ongoing dire humanitarian situation, in which more than two million Somalis remain in urgent need of food aid and other assistance.

Funding is drying up, less than one year after famine raged and despite negative humanitarian indicators, he noted. “I urge the international partners to sustain and expand their assistance to Somalia, to prevent it from sliding back into famine and misery,” he said.