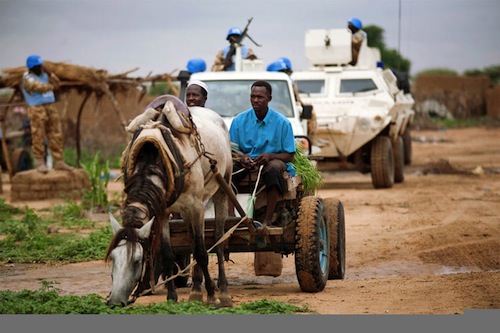 A senior United Nations humanitarian official in Sudan warned that the “heinous act” leading to the deaths of two non-governmental organization workers in South Darfur – an urban shoot-out between Government troops and rebels – highlights the unstable security situation and threatens to disrupt the flow of relief aid to the strife-torn region.

“Humanitarian workers in Darfur are there to improve the lives of others. They should not have to pay for their noble work with their own blood,” said United Nations Resident and Humanitarian Coordinator in Sudan, Ali Al-Za’tari, in a statement on the events that occurred in South Darfur.

Al-Za’tari expressed the sadness of the UN System and its partners in Sudan over the killing in Nyala of two Sudanese workers from World Vision International. According to the statement, a third World Vision staff member was also critically injured during the fighting between Government forces and an armed group.

He also expressed the same feelings for the human and material losses that afflicted Nyala and its inhabitants as a result to the “horrific events” it has gone through.

“I insist on all parties to this conflict to respect their obligation to protect humanitarian workers and other civilians. I urge the Sudanese Government to launch an investigation and bring the perpetrators of this murder to justice,” said Al-Za’tari.

While expressing his deepest sympathies and condolences to the families of those killed and injured “by this heinous act,” Mr. Al-Za’tari underscored: “The events which led to the deaths of our World Vision colleagues – a shoot-out in an urban area of Darfur’s most populated city – highlights the continuing unstable security in this region that threatens to disrupt the flow of the much needed humanitarian assistance, destabilize reconciliation efforts and derail progress towards greater economic and social development.”

“If humanitarian work in Darfur is forced to scale back because of the unsafe and insecure conditions for our staff and partners, then many more people in Darfur will suffer,” he said

Al-Za’tari echoed concerns similar to those expressed last week by Hervé Ladsous, UN Under-Secretary-General for Peacekeeping Operations, as he wrapped up a visit to Darfur.

Speaking to reporters on 4 July in the Sudanese capital of Khartoum, Mr. Ladsous noted with concern the recent intensification of conflict in Darfur and its impact on the civilian population. “We have witnessed deterioration in the security situation. More people have been displaced—over 300,000 since the beginning of this year—due mostly to tribal clashes,” the head of UN peacekeeping said.

Ladsous called on all parties to cease hostilities and praised the efforts of the joint African Union-United Nations Operation in Darfur (UNAMID), “who serve in very difficult circumstances, to protect civilians, secure the delivery of aid and support the peace process.”

He further stated that on 3 July, three peacekeepers were injured in an ambush on a UNAMID convoy near Labado, East Darfur. “Attacks on peacekeepers are a crime,” he said, adding that in violation of international humanitarian law, a UNAMID ambulance was fired upon by the unidentified armed group that had mounted the ambush.

Condemning the incident and noting the peacekeepers’ robust response to the attack, Mr. Ladsous stressed that the perpetrators of the incident must be apprehended and prosecuted.