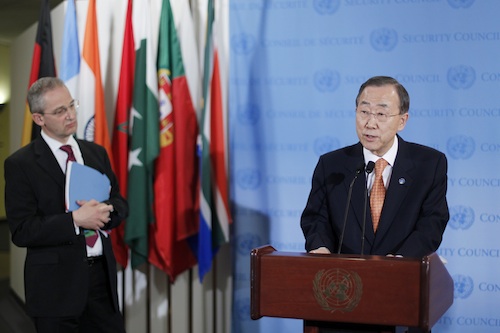 Secretary-General Ban Ki-moon today marked the anniversary of the uprising in Syria by calling for an end to the ongoing bloodshed, which has claimed more than 8,000 lives since popular protests began a year ago, and for a peaceful resolution of the crisis. “It is urgent to break the cycle of violence, stop military operations against civilians and prevent a further militarization of the conflict in Syria. The status quo in Syria is indefensible,” said a statement issued by the Secretary-General’s spokesperson. “Well over 8,000 are dead as a result of the Government’s decision to choose violent repression over peaceful political dialogue and genuine change,” it added.

One year ago, the statement noted, Syrians emboldened by the changing tide of history in their region stood up in the streets of Damascus to appeal for their universal rights and freedoms. Peaceful popular protests then began to spread across the country. “The Syrian authorities responded with brutal repression, which has continued unabated.”

Mr. Ban voiced his solidarity with the people of Syria and their legitimate aspirations to dignity, freedom and justice, and called for all violence to end and for a peaceful resolution of the crisis.

He urged the Syrian Government and opposition to cooperate with the efforts of the Joint Special Envoy of the UN and the League of Arab States, Kofi Annan, who put forward proposals to end the crisis during his meetings in Damascus, including with President Bashar al-Assad, last weekend.

“I presented a set of concrete proposals which would have a real impact on the situation on the ground and which will help launch a process aimed at putting an end to this crisis,” Mr. Annan stated during the visit. “I told the President that my main preoccupation is the welfare of the Syrian people – that we should place the interests of the people at the centre of all our efforts.”

Tens of thousands of people have been caught up in the violence since the start of the uprising, which is part of the broader Arab Spring movement across North Africa and the Middle East.

“As intense fighting continues in Syria, and people are caught up in the violence, it is increasingly vital that humanitarian organizations have unhindered access to identify urgent needs and provide emergency care and basic supplies. There is no time to waste,” Under-Secretary-General for Humanitarian Affairs Valerie Amos said in a statement.

A number of UN and Organization of Islamic Cooperation (OIC) technical staff will accompany the mission and take the opportunity to gather information on the overall humanitarian situation and observe first-hand the conditions in various towns and cities.

“I repeat my calls to the Government of Syria to allow humanitarian organizations unhindered access, so that they can help people in need, in a neutral and impartial manner,” said Ms. Amos, who is also UN Emergency Relief Coordinator.