Syria: Greece is monitoring with concern and composure 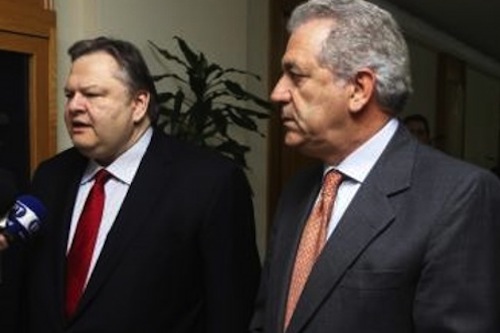 VENIZELOS: “The Middle East, North Africa and the Eastern Mediterranean are in crisis, or at least in a state of tension. These three regions are interlinked, and Greece, which is a close neighbour of this region, is monitoring the issues closely, with concern and composure, trying to play its role as a factor for stability, peace and security.

Greece is a member state of the European Union and a longstanding member of NATO. It is fully aware of where it stands internationally and, of course, what its international obligations are.

We are also interested in everything that happens in the Middle East, because Greece wants to function in an exemplary manner, always within the framework of international law – and more specifically the Law of the Sea – in the Eastern Mediterranean space.

…As I had the opportunity to say in previous statements, a heinous crime has been perpetrated in Syria: the use of absolutely prohibited chemical weapons. This crime is condemned by the whole of the international community, by the European Union and by Greece.

Our response on this issue is absolute, it is clear. And of course this has to be set down in a corresponding manner that produces results.

But at the same time, the political process must be safeguarded. The international community’s objective is and must remain the convening of the Geneva II Conference, which is solely capable of shaping a permanent, viable solution in Syria. Syria is a decisive country in developments in the wider region.

We are also monitoring issues with regard to the Greek citizens who are in Syria, so that we can provide them with all possible assistance. And, naturally, we are in full coordination with not only the Defence Ministry, but also all the co-competent Ministries, within the framework of the responsibilities of each of those ministries.”

AVRAMOPOULOS: “…Our country, as a stable and stabilizing factor in the region, is always prepared to meet its international obligations… from the very first moment, Greece took a crystal clear position. It pursued and proposed the political resolution of the problem that had been created and that has now taken on tragic dimensions.

It is true that the situation in the region is particularly dangerous both for Syria itself as well as for the wider region. So I come back to what I said earlier: that our role is crystal clear, we are at the service of the international community, of international law, in keeping with our contractual obligations within the framework of the international organizations.

Mr. Venizelos and I looked at all the facets of the situation as it has taken shape, with composure, prudence and good preparation. Greece is always ready to assist in creating the conditions that will lead our wider region to an environment of safety, security, stability. And of course we always stand by the peoples of the region who are fighting for democracy.”