Posted on: January 29th, 2013 by AlYunaniya Staff No Comments 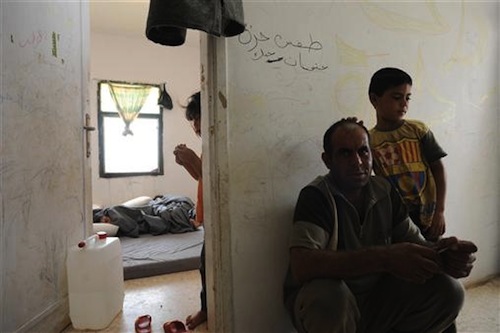 Ahead of a major humanitarian pledging conference for Syria, a senior United Nations relief official urged greater funding to assist millions of people in need amid a deteriorating situation inside the country and a particularly harsh winter in the region.

“The situation in Syria, as we all know, continues to deteriorate and that means that there are greater needs… more people in need but also that the needs are more acute as the coping mechanisms continue to collapse,” John Ging, the Director of Operations for the UN Office for the Coordination of Humanitarian Affairs (OCHA), told a news conference in New York.

“The biggest humanitarian effort in Syria is the effort of the population to support their brothers and sisters at this incredibly difficult time,” he added. “Families are hosting so many people and they themselves are also affected by the situation.”

Mr. Ging, who recently led an inter-agency humanitarian mission to Syria and Lebanon, cited a funding shortfall that is affecting the ability of the UN and its partners to deliver vital assistance, including food, water and medical supplies.

His comments come ahead of the humanitarian pledging conference that Secretary-General Ban Ki-moon will chair in Kuwait on Wednesday. The conference seeks to raise $1.5 billion to assist civilians affected by the ongoing conflict over the next six months, including those inside the country as well as those taking refuge beyond its borders.

In addition to those uprooted by the conflict, at least 60,000 people, mostly civilians, have been killed in Syria since the uprising against President Bashar al-Assad began in early 2011.

The particularly harsh winter has compounded the suffering of people in need, especially IDPs living in shelters lacking adequate insulation with no winter clothes and no blankets. Lack of fuel and electricity has been a major challenge for those affected as well as for those trying to deliver vital humanitarian aid, according to OCHA.

Despite immense security challenges and limited access, UN agencies and humanitarian partners have scaled up aid and are reaching people in all governorates across the country. The World Food Programme (WFP) is currently reaching about 1.5 million people a month with vital food assistance.

The UN Children’s Fund (UNICEF) and the World Health Organization (WHO) have helped vaccinate millions of children against measles and polio, while the UN High Commissioner for Refugees (UNHCR) and partners continue to support hundreds of thousands of refugees in neighbouring countries.

WFP Executive Director Ertharin Cousin returned to region on Sunday to visit the Za’atari refugee camp amid concerns of an influx of Syrian refugees crossing the border to Jordan. This is the second time that she has visited the refugee camps in Jordan in less than three months.

“We are significantly increasing the number of meals we provide to people as they cross, but the scale of human suffering is growing, and neighbouring countries like Jordan are exhausting their resources to deal with the crisis,” said Ms. Cousin.

More than 30,000 Syrians have arrived at Za’atari camp since the beginning of the year, and thousands more cross the border every night. WFP provides ready-to-eat food to Syrians arriving at the camp and, once they have settled in, supplies them with food rations to cook in communal kitchens. The camp is a temporary home to around 65,000 people.

Ahead of Wednesday’s pledging conference, the head of the UN Relief and Works Agency for Palestine Refugees in the Near East (UNRWA) is urging donors not to ignore the plight of some 525,000 Palestine refugees in Syria.

“While all civilians in Syria are bearing the brunt of the violence, the present situation of Palestinians in Syria is exceptional,” said Commissioner General Filippo Grandi.

Most of the Palestinian refugees in Syria now rely on UNRWA as their sole means of support, the agency pointed out in a news release. Several UNRWA schools in the country are currently acting as a last place of refuge for 9,000 people, while tens of thousands languish under harsh conditions in neighbouring countries. Some 20,000 people have fled to the over-crowded refugee camps of Lebanon.

The agency added that many Palestinians in Syria have been killed, including five UNRWA staff members.