Syria: spate of attacks on government media and journalists 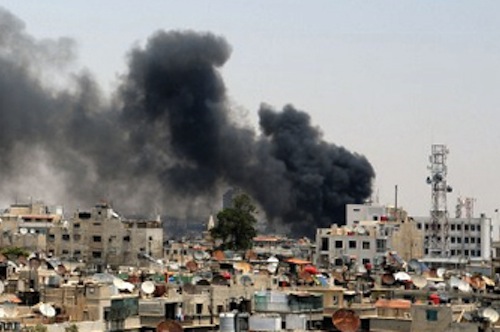 Reporters Without Borders condemnEd the bombing of the state TV station’s headquarters in the high-security district of Omeyyades in Damascus. The bomb exploded on the third floor of the building, where the management offices are located. The exact number of casualties and the positions they held are not known. The station did not stop broadcasting.

The bombing came just two days after a rebel attack on the state TV building in the northwestern city of Aleppo and a month after an explosion caused severe damage to the headquarters of the pro-government TV station Al-Ekhbarya.

“We condemn these targeted attacks on state TV buildings in Damascus and Aleppo as well as murders and abductions of journalists,” Reporters Without Borders said. “Neither news media, professional journalists nor citizen journalists should be targeted by any of the parties to this conflict.

“We urge the main components of the opposition, both civilian and military, to condemn these atrocities. We also strongly condemn the publication and broadcasting of messages inciting hatred and violence against the civilian population. The media must not relay propaganda of any kind.”

According to the London-based Syrian Human Rights Monitoring Centre, Mohammad Sayeed, the state TV presenter who was kidnapped from his Damascus home on 19 July, has been killed.

His abduction and murder were clamed by Al-Nosra, an Islamist group, which described Sayeed as a pro-government militia member (shabbih) and said he was interrogated and then executed. The Al-Nosra communiqué, accompanied by a photo of Sayeed with his abductors, was posted on a website that displays an Al-Qaeda flag.

State TV chief Maan Saleh has not confirmed Sayeed’s death. “We have no hard evidence that he is dead,” Saleh told Agence France-Presse. The rebel Free Syrian Army has meanwhile denied having anything to do with his abduction and murder.

Talal Janbakeli, a state TV cameraman, was meanwhile kidnapped by the Harun Al-Rasheed militia yesterday in Damascus. In a video released by his abductors, he could be seen in an abnormal state repeating phrases dictated by a person out of camera view about the Syrian army’s atrocities.

State TV reporter Kareem Shibani was shot and wounded in the back while covering clashes in the Damascus neighbourhood of Tadamun on 4 August.

The Syria-News website has reported that the journalist Ahmed Thabet Mohssen has been missing since 1 August. Family sources said they thought he was arrested with a friend at an army checkpoint at Qorra al-Assad, near Damascus.

Finally, France 24 reporter Chady Chlela had to leave Syria on 29 July, just 48 hours after arrived because messages threatening him were circulating on social media. They described him as a Shiite agent in the Syrian government’s pay and said he should be prevented from working with the rebels. On this return to Paris, he filed a complaint about “death threats” with the prosecutor’s office.