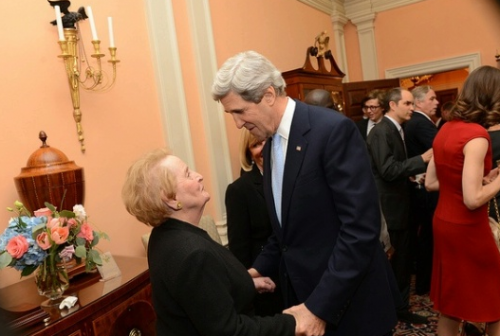 US, European and Arab officials pledged on Thursday at the Friends of Syria meeting in Rome to provide more tangible ways to assist the opposition battling President Bashar al-Assad’s regime.

The concern over the lives of the Syrian people due to the ongoing violence threats was expressed in a press release following the meeting.

“The regime must immediately stop the indiscriminate bombardment against populated areas which are crimes against humanity and cannot remain unpunished,” according to the statement.

The United States pledged $60 million in “non-lethal” assistance for the Syrian opposition as well as the first direct U.S. aid to opposition fighters in the form of food and medical assistance.

“Aiding the people who are fighting for a free Syria is a cause to which President Obama and all of us are deeply committed. And what unites us today is our shared conviction that the best solution for Syria is a political solution. The sooner we can get started, the more lives we’ll save,” Secretary of State John Kerry said.

Meanwhile, Turkish leaders prepare to welcome the top US diplomat for talks that are set to revolve around Syria, a day after he announces fresh aid for the Syrian rebels.

The European Union, meanwhile, said it amended sanctions on Syria to permit the supply of armored vehicles, non-lethal military equipment and technical aid to the Syrian opposition, provided they were intended to protect civilians.

The meeting came ahead of a meeting of the Syrian National Coalition on Saturday in Turkey where the umbrella opposition group is to elect a prime minister and government to run parts of Syria seized by rebels.

The United States and European countries have been hesitant to provide militarily aid to the opposition on the ground until now.