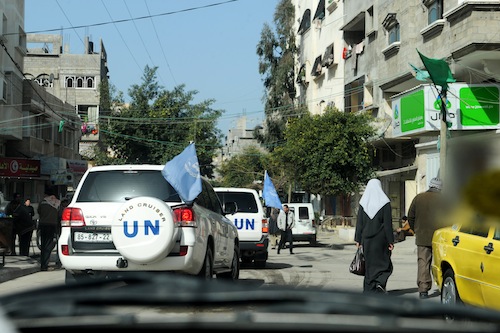 A team of United Nations inspectors probing the alleged use of chemical weapons in Syria will return to the Damascus suburb to which it was headed when its convoy was attacked by snipers, a UN spokesperson confirmed this morning.

“The first vehicle of the Chemical Weapons Investigation Team was deliberately shot at multiple times by unidentified snipers in the buffer zone area,” the spokesperson said in a media note.

“As the car was no longer serviceable, the Team returned safely back to the Government check-point. The Team will return to the area after replacing the vehicle,” the UN added.

The Team, led by Swedish scientist Dr. Åke Sellström, is spending up to 14 days, with a possible extension, probing the alleged use of chemical weapons by the Government at Khan al-Asal, as well as two other allegations reported by Member States. The team is working in cooperation with the Organization for the Prohibition of Chemical Weapon (OPCW) and the UN World Health Organization (WHO).

“It has to be stressed again that all sides need to extend their cooperation so that the Team can safely carry out their important work,” the UN said in the note.