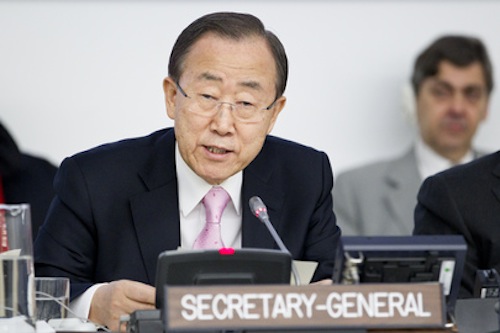 Secretary-General Ban Ki-moon is gravely concerned about reports of air strikes in Syria by the Israeli Air Force, according to a statement from his spokesperson, which stressed that the United Nations does not have details of the reported incidents nor is in a position to independently verify that they took place.

“The Secretary-General calls on all sides to exercise maximum calm and restraint, and to act with a sense of responsibility to prevent an escalation of what is already a devastating and highly dangerous conflict,” Ban’s spokesperson said in the statement.

“The Secretary-General urges respect for national sovereignty and territorial integrity of all countries in the region, and adherence to all relevant Security Council resolutions,” he continued.

A series of powerful explosions rocked the outskirts of Damascus early this morning, which Syrian state television attributed to Israeli missile attacks on a Syrian military installation, according to media reports.

Top UN officials, including Ban and his political chief, Jeffrey Feltman, have said on numerous occasions that a political solution is the only answer for long-term in the country and the region.

Since the uprising against President Bashar al-Assad began in March 2011, more than 70,000 people, mostly civilians, have been killed and some three million displaced.