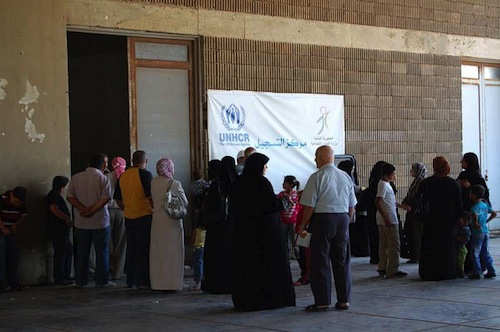 Secretary-General Ban Ki-moon expressed extreme concern by the intense fighting in Syria and the increasing risk of the conflict spilling over to Lebanon, and urged all parties to find a political solution to the crisis.

“The Secretary-General is deeply concerned by the acknowledged increased participation in the fighting in Syria by Hizbollah, as well as by the risk of spillover in Lebanon, which has witnessed growing tension over the past week,” Mr. Ban’s spokesperson said in a statement. “All in the region should act responsibly and work towards lowering rhetoric and calming tensions in the region.”

According to media reports, two rockets hit a Hizbollah-run area in the Lebanese capital, Beirut, on Sunday, a day after the Lebanese group’s leader pledged to keep supporting Syrian President Bashar Al-Assad.

“The Secretary-General reiterates the paramount importance of preventing a dangerous spillover of the conflict across borders,” the statement said. “He believes that strict adherence to the Baabda Declaration will help preserve Lebanon’s stability and security, and calls on all Lebanese leaders and parties to renew their commitment to it and keep Lebanon safe from conflict.”

The Baabda Declaration, which was issued during a National Dialogue meeting in June 2012, calls for keeping Lebanon neutral from regional tensions and crises. The Declaration is named after the Baabda Presidential Palace, where the meeting was held.

In the statement, Mr. Ban’s spokesperson said the Secretary-General has consistently opposed the transfer of arms and fighters from outside Syria to either side inside the country and has repeatedly urged respect for the national sovereignty and territorial integrity of all countries in the region.

“As preparations are ongoing for the international conference on Syria, the Secretary-General urges all countries, organizations and groups immediately to cease supporting the violence inside Syria and instead to use their influence to promote a political solution to Syria’s tragedy.”

Mr. Ban also reiterated that protecting civilians must be a priority and urged all parties to abide by their obligations under international humanitarian law.