Posted on: January 30th, 2013 by Tina Michalitsis No Comments 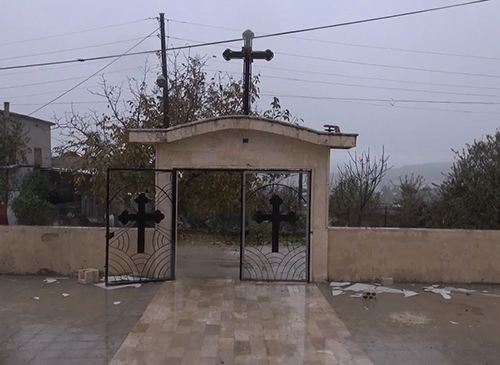 Armed opposition groups appeared to have deliberately destroyed religious sites in mixed areas of Northern Syria, in November and December 2012, Human Rights Watch said following investigations in Latakia and Idlib governorates. An armed opposition group destroyed a Shia place of worship in Idlib governorate, and two Christian churches in Latakia governorate were looted. In all three cases evidence examined by Human Rights Watch suggests, and witnesses stated, that the attacks took place after the area fell to opposition control and government forces had left the area.

While some opposition leaders have pledged to protect all Syrians, in practice the opposition has failed to properly address the unjustified attacks against minority places of worship, Human Rights Watch said. The opposition also has failed to rein in gunmen engaging in looting and other criminal activities, like kidnappings. Human Rights Watch urged armed opposition groups to protect all religious sites in areas under their control and to discipline members who loot or kidnap.

Human Rights Watch has previously documented the destruction and vandalization of a mosque in Taftanaz, Idlib by Syrian government forces.

“The destruction of religious sites is furthering sectarian fears and compounding the tragedies of the country, with tens of thousands killed,” said Sarah Leah Whitson, Middle East director at Human Rights Watch. “Syria will lose its rich cultural and religious diversity if armed groups do not respect places of worship. Leaders on both sides should send a message that those who attack these sites will be held accountable.”

Under international humanitarian law, parties in an armed conflict have a responsibility not to intentionally attack religious buildings that are not being used for military purposes. They are prohibited from seizing, destroying, or doing willful damage to religious buildings or institutions and from theft, pillage, or vandalism directed against important cultural property. Deliberate attacks on religious sites that are not military objectives are war crimes.

Human Rights Watch researchers conducted a four day investigation in the Latakia and Idlib countryside in opposition-controlled areas into abuses by both government and opposition fighters in Sunni, Alawite, Christian, and mixed sect villages. In three villages – Zarzour, Ghasaniyeh, and Jdeideh – Human Rights Watch found evidence of attacks against religious minority sites after the areas fell under the control of armed opposition groups and government forces had left the area.

In all three villages, religious minorities had either all fled or left their homes in large numbers. Residents in Zarzour, a predominantly Sunni village with a small Shia population, told Human Rights Watch that their Shia neighbors had fled because they feared retaliation by opposition forces because, in their opinion, the local Shias had been supportive of government forces.

These residents said this perceived support was reflected in alleged preferential treatment that government forces gave to Shia residents when the government forces were in the village. In Ghasaniyeh and Jdeideh, two Christian villages in Latakia, residents told Human Rights Watch that many of their neighbors fled because of dire humanitarian conditions, fear of armed opposition fighters in their area, and fear of air and artillery strikes by government forces.

“All parties to the conflict should promote conditions that would allow civilian populations to remain in their homes,” Human Rights Watch said. The Syrian government should stop deliberate and indiscriminate air and artillery strikes against civilians, and opposition leadership should protect all civilians in their areas, including members of religious minorities, from any retaliatory attack or criminal activity. All parties should facilitate the delivery of humanitarian assistance to areas under their authority.