Posted on: September 30th, 2012 by AlYunaniya Staff No Comments 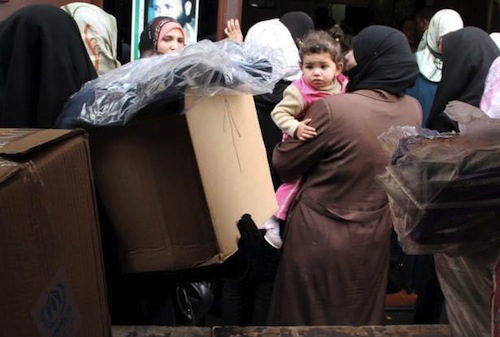 The year and a half of deadly violence in Syria is clear testimony of the need to reform the United Nations to strengthen its preventive capabilities, European ministers told the General Assembly.

“The truth is that the Security Council has become an obstacle to international efforts to address and solve situations such as in Syria,” Iceland’s Foreign Minister, Össur Skarphéðinsson, said in his speech to the 67th Assembly’s General Debate, at UN Headquarters in New York.

More than 18,000 have been killed and hundreds of thousands more driven from their homes in fighting between the Government and opponents in the Middle Eastern country.

“The Syrian problem is also a wake-up call for the UN with regard to the Security Council. Syria has demonstrated how arcane the Council is, and how out-of-tune it is with the needs of the modern world,” he added of the 15-member body, in which a veto from one of its five permanent members can trump a decision by all 14 others.

Resolutions to address the Syrian situation have twice been vetoed in the past year, most recently in July.

“Thousands of innocent people, not least innocent children, are losing their lives due to an oppressive regime,” Mr. Skarphéðinsson told the gathered delegates, on the fifth day of the General Debate. “The international community must unite to end the violence and we must make a better effort to seek a political and peaceful solution for the sake of the Syrian people.

“We must also ensure that those, on both sides, who commit atrocities, will at the end of the day face their responsibility in an international court of law.”

The Foreign Minister also strongly criticized Israel for its blockade of Gaza and the violation of the human rights of the Palestinians in the West Bank. He also appealed to Israeli Prime Minister Benjamin Netanyahu not to bomb Iran over that country’s nuclear programme and to Iranian President Mahmoud Ahmadinejad not to build a nuclear bomb.

The call for strengthening the UN to endow it with the capability to forestall crises such as the one now engulfing Syria was echoed by Foreign Minister Nebojša Kaluderovic of Montenegro.

“The scale and consequences of violence in Syria serve as a stern reminder of the importance of preventive measures in preserving international peace and security, which requires enhancement of the UN preventive capacities and the role of dialogue and mediation in peaceful conflict resolution,” he said to the Assembly.

“Montenegro strongly advocates an approach that strives towards an early prevention and elimination of threats before they evolve into sources of conflict,” he added, pledging to increase his country’s participation in peacekeeping operations in accordance with its capacities.

Calling the Syrian crisis an “existential challenge” to the UN, in her remarks to the Assembly, Liechtenstein’s Foreign Minister Aurelia Frick called on the Council’s five permanent members – China, France, Russia, United Kingdom and United States – to give up their right of veto in matters of atrocities.

“We ask them to acknowledge that the Council must at all times act in accordance with the purposes and principle of the United Nations,” Ms. Frick said. “And we therefore request that they pledge not to use the veto to block Council action aimed at preventing or ending genocide, crime against humanity and war crimes.”

In his address to the General Debate on Friday, Andorra’s Foreign Minister, Gilbert Saboya Sunyé, said that for all its shortcomings, the world was still a much better place thanks to the United Nations.

“Although the way the United Nations system works is indeed far from optimal, we should not forget however that what today is reality seemed an unattainable dream a century ago,” he said. “We should move on from talk of dreams and progress to talk of ambition. We should move on from dreaming about change to having the ambition to change.”

The European Ministers are among of scores of world leaders and other high-level officials presenting their views and comments on issues of individual, national and international relevance at the Assembly’s General Debate, which ends on 1 October.