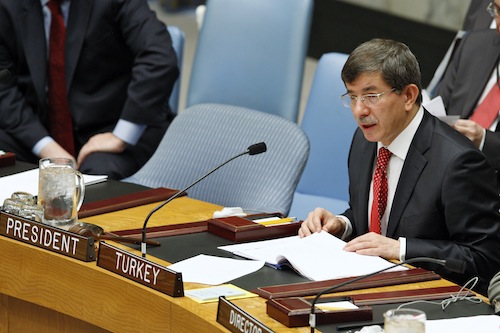 A Syrian passenger plane took off from the Turkish capital Ankara on Thursday after being grounded for eight hours by Turkish authorities on suspicion it was carrying military equipment destined for Damascus.

Meanwhile, Turkish officials say they have confiscated “objectionable cargo” from a the Syrian passenger jet intercepted en route from Moscow to Damascus.

“There is illegal cargo on the plane that should have been reported” in line with civil aviation regulations, Davutoglu was quoted as saying by Anatolia.

“There are elements on board that can be considered objectionable,” he said, adding that Turkey would hold on to the cargo for further examination without giving any further details regarding the content.

The confiscated cargo was initially believed to be military equipment , while state-run TRT said it was believed to be communications devices used for military purposes.

The plane was allowed to leave eight hours after it was intercepted, with all of its 30 passengers on board, according to Hurriyet daily.

Relations between Ankara and Damascus have been dramatically strained since June, when a Turkish jet was brought down by Syrian fire, killing its two pilots onboard.

Russia, from where the Syrian plane took off, is one of the closest allies of Bashar al-Assad’s government and has blocked UN resolutions against Damascus.

Meanwhile, battles between government troops and opposition fighters continued across Syria on Wednesday.

Ban Ki-moon, the UN secretary-general, urged the Assad administration to declare a unilateral ceasefire, calls which Syria rejected insisting that rebels must stop the violence first.

Jihad Makdissi, Syrian foreign ministry spokesperson, said on Wednesday that twice during the abortive UN military observer mission deployed to Syria between April and the end of August, the government had implemented a ceasefire.