Syria’s Assad: “Free Army is not an army and it is not free” 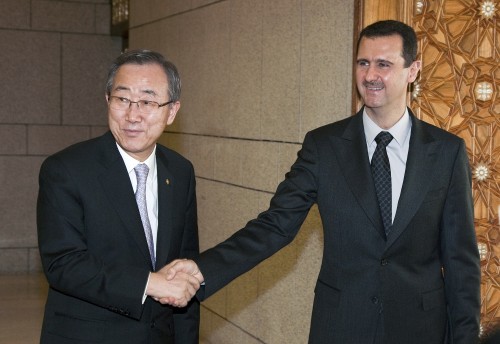 The results of the May 7 legislative poll showed that the Syrian people “are until now supporting the policy of reform” and a majority support the regime, Syria’s Assad said in one of the few interviews conducted during the 15-month crackdown on anti-government protests in syria on Rossia 24.

State-run Syrian TV SANA reported that the voter turnout in the election was 51 per cent, however, only limited results have been diclosed.

Assad suggested in the interview that the West was behind an uprising against his rule and told Rusiian TV: “Whatever happens in the Middle East, the chaos that is now being created, the terrorism, will have a negative effect on Europe as well, because it is not far from our region.”

“For the leaders of these countries, it’s becoming clear that this is not ‘Spring’ but chaos, and as I have said, if you sow chaos in Syria you may be infected by it yourself, and they understand this perfectly well,” Assad said.

Referring to the opposition Free Syrian Army fighting the regime he said, “It is not an army an it is not free,” accusing them of  geting money and weapons from abroad from various countries. “It is a group of criminals who have for years broken the law and received convictions. There are also religious extremists like from Al-Qaeda.”

Assad also noted that there were many foreign mercenaries fighting the with the opposition that have been captured and soon would be inofrmation about them would be released by the government to show to the world.

Meanwhile,  more than 200 U.N. observers have been deployed throughout Syria to monitor the cease-fire agreement, which has been repeatedly violated since it took effect on April 12.

Assad said that since the observers’ arrival, there had been a reduction in conflict between the two sides but an increase in “terrorist attacks”.

He blamed the West of ignoring opposition violence, he said: “The West only talks about violence, violence on the government side. There is not a word about the terrorists. We are still waiting.”

Assad’s remarks came as six UN monitors who were caught up in violence in the northern town of Khan Sheikhoun. None of the observers were wounded, but they had to spend the night with rebels in the area which handed them back to their UN colleagues on Wednesday, according to Al Jazeera.