Posted on: September 12th, 2012 by Julie Jalloul No Comments 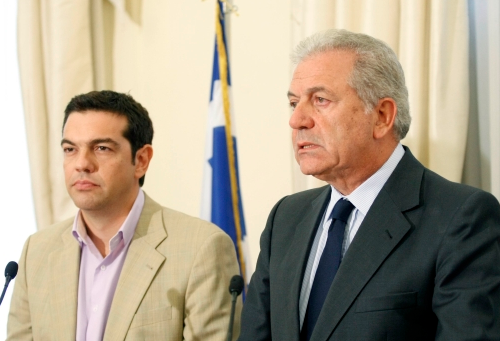 Leader of SYRIZA Alexis Tsipras, expressed his concerns about the developments in Syria and the need for Greece to “intervene” in order  for the EU to enhance assistance so Greece can host refugees fleeing the violence in the country in a meeting with Foreign Minister Dimitris Avramopoulos, on Wednesday.

“We had the opportunity with the Minister of Foreign Affairs to exchange thoughts on critical issues like the developments in Syria and the deteriorating humanitarian situation there and the influx of refugees the conflict  has created.”

In this context, he asked the foreign minister for Greece to intervene, in order to receive greater assistance from the EU to host, refugees coming from the neighboring country, which should be given the opportunity to be repatriated when the crisis in the region is resolved. ”

As stated by the Foreign Minister, the meeting was particularly useful, as it is important to know the positions of SYRIZA in matters of foreign policy, but also to provide the opposition the information needed.

Tsipras also expressed his concerns for the “clouds of war over Iran”, which he said affect “our country directly”, to the extent that the tightening of relations with Israel not only in terms of  know-how and trade, “which we fully accept and would like to promote, but also in terms of military cooperation which is something that concern us, because no way should our country become part of the problem in the Middle East, but part of an investigative solution”.

Avramopoulos and Tsipras both agreed on the need for the country’s foreign policy to be based on national understanding.

There are currently 80,000 Syrian refugees in Turkey, according to the office of the United Nations High Commissioner for Refugees, and Greek officials say they expect nearly 15,000 of them to try to enter Greece by the end of September. Greece recently stepped up its border patrols, transferring almost 1,900 border guards from other parts of the country to the northeastern region of Evros, which borders Turkey.

At the same time, local authorities on the islands of the northeastern Aegean are bracing for what is expected to be a growing wave of refugees from war-torn Syria, as measures to reduce the inflow of illegal immigrants via the Greek-Turkish border in the Evros region have put a greater strain on the porous coastlines of Greece’s islands, according to Kathimerini.

Local officials in the northeastern Aegean say that there has already been a significant increase in the number of refugees from Turkey. Their concern is that this wave will grow as the civil war in Syria escalates and that they are ill-equipped to deal with such a large influx.