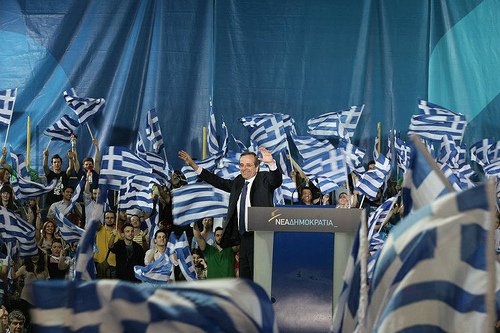 Antonis Samaras leader of New Republic (ND) and Alexis Tsipras leader of SYRIZA seem to battle for votes, according to new polls published today by the Sunday papers.

Of the three polls published Sunday, two put Syriza ahead and one the conservative ND party ahead.  At the same time, polls showed a decline in percentages for the following parties: Greek Independent, Communist Party, Golden Dawn and Ecologists Greens.

According to Public Issue, respondents, when asked who is more suitable for the Prime Minister’s job put Alexis Tsipras next to … “No one” with 19%, followed by Antonis Samaras 17%, Evangelos Venizelos 16%, Fotis Kouvelis 15%, Panos Kammenos 7%, Aleka Papariga 2% and N. Michaloliakos 1%.