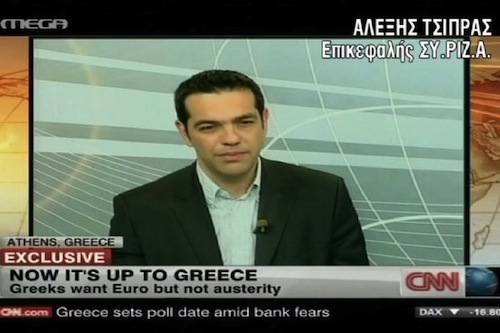 Referring to the possibility Greece exiting the Eurozone, Tsipras said: “I don’t believe that we will have a benefit if Greece goes back to the drachma. I don’t believe that because Eurozone will be in a big disaster… At the same time, we don’t want to go back to drachmas because, in Greece, we will have the poor people to have drachmas and the rich people to buy everything with euro… This is not good evolution for society and for the people… the majority of the people need to be in the safe…”

When asked what he would do as president, Tsipras said, “First of all, we will cancel all these austerity measures…. We believe that this crisis is not a Greek crisis but a European crisis. And we will try to find a common solution – about the role of ECB, about the Europe bonds, about the negotiation of the public debt of all the European countries.”

According to the official transcript, Tsipras stressed: “We will cancel the memorandum. And then we will go to renegotiate, in a European level, about a common way to go out of this crisis… This crisis is not a Greek crisis, but a European crisis. And we will try to find a common solution… That’s our position.”

Asked if he could foresee partners in that negotiation, Tsirpras was optimistic: “We think we will find partners…. We will have the same problem with Italy, with Spain, with Portugal, and also with Ireland and also in the central Europe.”