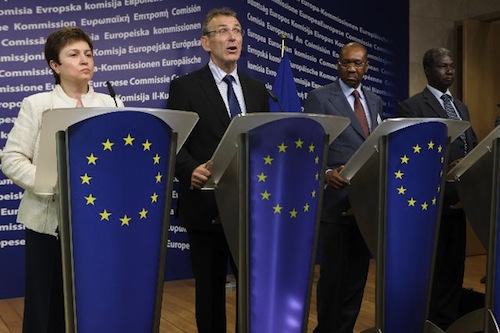 It was very characteristic that the European Commission press release issued yesterday about the EU’s support for the French military operations in Mali was available only in the French language. On the same day 17 January the Council of the European Union found the opportunity to announce the opening an EU military training mission in the impoverished African country, divided by civil war and until some weeks ago forgotten by all and every European institution.

As long as the extraction of Mali uranium and other valuables from its soil by French and other western firms went unobstructed, nobody cared about what happens in the poverty-stricken country. Entire populations had been pushed to the desert by the loyal to Paris regime of the capital Bamako. It’s the economic interests stupid.

However when the Mali desert tribes found cheap weaponry after their children returned, home having served as missionaries the Gaddafi regime in Libya, thus becoming easy recruits for the Islamist rebels, the entire West rose to “save” the country from being split. It must be noted that the Islamists are the only organised force opposing the Bamako oppressive regime. No wonder then why the desert tribes follow and support them, being their only hope to have control of their soil.

Already from Wednesday 16 January the European Parliament in Plenary Session had issued a statement backing France’s initiative in Mali. The announcement goes like this:

“MEPs saluted France’s military engagement in Mali and urged EU member states to show real solidarity with Paris in Tuesday’s 15 January urgent debate with EU foreign policy chief Catherine Ashton. They also deplored the lack of a European response to the crisis in the region. France’s military intervention was welcomed by all Parliament’s political groups, which highlighted the exceptional circumstances created by the north Mali rebels’ offensive against the south. MEPs stressed that Mali must not fall into the hands of terrorists”.

This is absolute hypocrisy. For one thing there was no solidarity for Paris by all political groups. There is solidarity only by some western governments. London, Washington and Brussels have expressed their backing to the French intervention in Mali. Even Berlin has not yet expressed unquestionable support to Paris over the Mali issue.

It was only High Representative Catherine Ashton who expressed unconditional support to France. She even decided to spend €50 million of EU money for this support. The Council of Europe announcement goes like this:

“In the light of the recent developments in Mali, on 17 January 2017 (n.b. this is a typing mistake of the year 2013 to be credit on the haste of some people in the Council running in support of Paris) the EU’s Foreign Affairs Ministers decided to speed up the deployment of the military training mission in Mali (EUTM Mali).

The Council was united in condemning the aggression of terrorist groups and welcomed the quick response of France, supported by other EU member states”. Mind you the announcement doesn’t say unanimous, it says united, which means there was not unanimity. In any case the issue takes everyday new dimensions after the Algerian Islamist have intervened in favour of the Mali rebels.

It seems that unfortunately Islamism has become the last-ditch of defence for the impoverished millions of people in North Africa and the Middle East.

It was not always like that. The Arab version of secular socialism, of Nasserism in Egypt and Baathism in Iraq and Syria had totally transformed those societies into secular states. It is the same for Turkey’s Kemalist secular tradition and the neo Muslim direction of Tayyip Erdogan.

It seems however that after some years of western interventions and economic impoverishment of vast masses of people the entire region has become a waste land stricken by lack of basic necessities and internal split supported if not created by the western governments. Now the West must face the repercussion of its policies in North Africa and the Middle East.