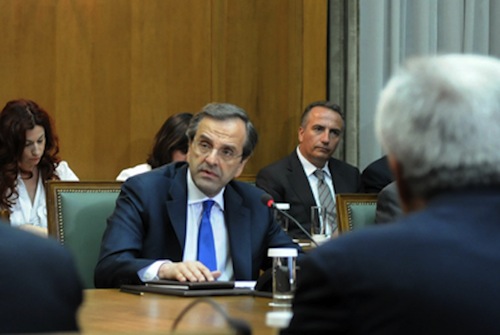 Prime Minister and his coalition partners are to meet again on Wednesday after failing to agree on the EUR 11.5 billion austerity package yesterday as troika heads who have  already arrived to Athens since Friday object measures of Greece’s austerity package. After a meeting with Antonis Samaras, both Evangelos Venizelos and Fotis Kouvelis stressed the need for the austerity measures to meet with the acceptance of voters, not just the troika.

Democratic Left leader Fotis Kouvelis said: “I am challenging for the measures to be fair, to ensure the financially weaker don’t suffer and for the measures to be part of a wider framework that would lead to growth… The recession is deep and our European partners have to realize that Greece cannot take any more. The troika has to realize that its making demands of a society that is already in pieces.”

PASOK’s Evangelos Venizelos argued: “We are concerned that the detailing of the measures should happen based on criteria of social justice and support for growth… There is no doubt about support for the government, there is however a question about support from society… My relationship with Mr. Samaras is excellent, as it is with Mr. Kouvelis. There is a question about society’s cohesiveness and the economy’s strength to survive.”

Finance Minister Yannis Stournaras had his first meeting with the troika heads yesterday afternoon to discuss the new austerity package, after their arrivals to Athens on Friday.

According to Finance Ministry sources, the troika heads “have objections to some of the measures… They want more details to understand some of the measures better,” protothema.gr writes. “This is just the start, there is a long way to go,” said the same source. According to Reuters, on their way out, Poul Thomsen (IMF) said the officials had held a “good meeting,” while Klaus Masuch (ECB) said that the troika would be working “day and night” with the government to resolve any problems.

Greece needs the troika’s approval for the austerity cuts in order to secure the disbursement of the next tranche of its EU-IMF bailout, which is worth 31.5 billion euros. The payment of the installment will also depend on the review of the Greek program that the troika officials are gathering so that eurozone decision-makers think in early October about whether to make changes to the country’s bailout.