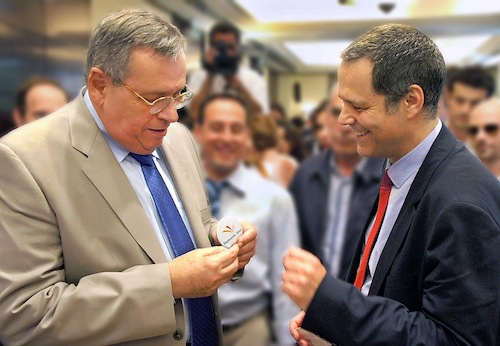 ‘Drasi’ and ‘Re-Create Greece’ parties announced their common descent in the coming elections, during a press conference yesterday. The two parties, which will maintain their independence, aim at forming a united voice of reform in Parliament, to ensure the country’s European perspective.

“The strength of our cooperation is the agreement on crucial and important issues in the critical moments the country goes through,” said Stephanos Manos (photo, left). Thanos Tzimeros stressed: “In Parliament, we will push for reforms and the vote of confidence will be provided on the basis of the parties’ commitment to specific timetable for reforms.”

An official declaration of Re-Create Greece writes: “We are productive people who have never been sustained by state largesse, and who envision a meritocratic and progressive state. We are successful entrepreneurs, corporate executives, professionals, scientists, intellectuals and conscientious public servants who cannot continue to support the parasites within their midst. We are not household names. However, each one of us has built islets of creativity and quality, in his family, his business and in his immediate environment. We know that there are many people in Greece who think and live their lives as we do. And we know that they are many more than it appears. They do not break store windows, they do not scream on television debates, they do not block roads, and they do not occupy buildings. They only feel pain and sorrow. They are the people we represent, the people on whom we rely, and the people we want with us.”

Re-Create Greece is an officially registered political party since December 2011.