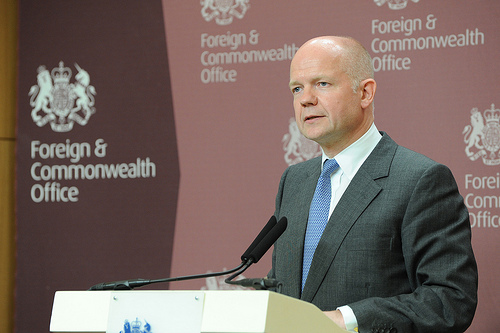 “The whole House will be united in support for the Syrian people. They have endured fifteen months of fear and suffering. 87,000 people have fled to neighbouring countries and up to 500,000 are internally displaced. As many as 15,000 people may have died and thousands of political prisoners are imprisoned and at risk of mistreatment and torture.

Each day reports emerge of savage crimes. The Syrian military are surrounding and bombarding towns with heavy weaponry, and then unleashing militia groups to terrorise and murder civilians in their homes. These deliberate military tactics are horrifyingly reminiscent of the Balkans in the 1990s.

Two weeks ago in al-Houlah 108 civilians died in this manner, including 49 children under the age of ten. A similar atrocity appears to have been committed last week in al-Qubair where 78 people were killed including women and children. UN monitors attempting to report on these events have been shot at and obstructed.

These grotesque crimes have illuminated to the world the nature of the events in Syria and the conduct of the Assad regime.

It is attempting with utter inhumanity to sow terror, to break the spirit of opposition in Syria and to try to reassert control. This is as futile as it is morally reprehensible. By branding their opponents terrorists and using tanks against them the regime is driving Syrians to take up arms to defend their homes; and by singling out particular communities it is inflaming sectarian tension.

There are credible reports of human rights abuses and sectarian attacks by armed opposition fighters, which we also utterly condemn. And we also have reason to believe that terrorist groups affiliated to Al Qaeda have committed attacks designed to exacerbate the violence, with serious implications for international security.

As a result Mr Speaker Syria today is on the edge of civil war. This could lead to thousands more casualties, a humanitarian disaster and human rights violations on an even greater scale, and instability in neighbouring countries.

We are working intensively to find a peaceful means of resolving the crisis.

Our approach, in close coordination with our European partners is first, to push for implementation of the Annan plan as the internationally-agreed road map to end the violence; second to increase the pressure and isolation felt by the regime, and third to ensure justice, accountability and humanitarian assistance for the Syrian people. I will take each of these in turn.

First, the UN and Arab League Envoy for Syria Kofi Annan has set out a six-point plan to end the violence and to start a political process to address the legitimate aspirations of the Syrian people. It is backed by two UN Security Council Resolutions, 2042 and 2043. The latter mandated the deployment of the 300 UN monitors who are now on the ground in Syria. I pay tribute to them for their difficult work in dangerous circumstances.

As Kofi Annan has made clear on many occasions, the onus is on the regime to call off its military assault, to adhere to a ceasefire and to allow a process of political reform. Political transition must be based on democratic principles and reflect the needs of all Syria’s minority communities, including the Kurds, Christians and Alawites.

On 1st April, the Syrian regime committed itself to implementing the Annan Plan and on 12th April announced a ceasefire. They have not kept either of these commitments.

Two weeks ago I discussed the situation with my Russian counterpart Sergei Lavrov in Moscow. I made the case for Russia to use its crucial leverage with the Assad regime to ensure the full implementation of the Annan Plan, since the collapse of Syria or descent into civil war would be against Russian interests as well as those of the wider world. I also raised the issue of arms sales to the Syrian regime which we believe should be stopped immediately.

In Istanbul on 1st June I held talks with members of the Syrian National Council and other opposition representatives including Kurds, and I returned there last week for discussions with Secretary Clinton, the Turkish Foreign Minister and the Foreign Ministers of 12 European and Arab nations.

I am in regular contact with Kofi Annan, and preparations are in hand for a meeting of the Friends of Syria Group, which now numbers more than 80 countries, in early July.

Last Thursday the Russian Government put forward its own proposal for an international conference on Syria. Such a meeting could help generate momentum behind the Annan Plan. However it would have to be a meeting that led to a change on the ground, and did not just buy time for the regime to kill more innocent people. So in our view any such meeting would need to be based on a common understanding that it would lead to a political transition; it should include genuine steps to implement the Annan Plan; and it should only involve nations that are committed to being part of the solution in Syria. We will discuss with our partners whether it is possible to agree concerted international action on this basis; discussions which my Rt Hon Friend the Prime Minister will take forward with other Heads of Government when he attends the G20 meeting in Mexico next week.

Making a success of the Annan Plan also requires the Syrian National Council and other opposition groups to put aside their differences, to unite around the common goal of a democratic transition, and to assure all Syria’s minorities that their rights will be protected in a multi-ethnic and democratic Syrian state. This has been my consistent message in all my discussions with opposition figures. We welcome the meetings with opposition groups that will be held in Istanbul later this week and subsequently in Cairo, which have our active support.

The Annan Plan is not an open-ended commitment. It cannot be used indefinitely by the regime to play for time. If the Annan Plan is not implemented, we will argue for a new and robust UN Security Council Resolution aimed at compelling the regime to meet its commitments under the Plan, and requiring all parties to comply with it. So we have already begun discussions at the Security Council on the elements of a Resolution.

We do not want to see the Annan Plan fail, but if despite our best efforts it does not succeed, we would have to consider other options for resolving the crisis, and in our view all options should then be on the table.

Second, we are taking steps to increase the isolation of the Syrian regime. On 29th May we expelled three Syrian diplomats from London including the Charge d’Affaires, in coordination with the US, Canada, Australia, France, Germany and Japan and other countries who took similar steps. And we are in discussions with Arab League and like-minded countries about measures to tighten the stranglehold on the regime’s resources and external sources of support, building on the 15 rounds of EU sanctions that already target 128 individuals and 43 entities.

Third, we are acting to help end impunity for atrocities, and we are supporting the humanitarian needs and legitimate aspirations of the Syrian people.

Britain co-sponsored the UN Human Rights Council resolution of 1st June which was carried by 41 votes to 3 against. It condemned the al-Houlah massacre, mandated the UN Commission of Inquiry to investigate and gather evidence about it and highlighted the UN High Commissioner for Human Rights’ recommendation that the UN Security Council should refer Syria to the International Criminal Court. We are working on a further UN Human Rights Council Resolution to reinforce these objectives.

We also sent a team of British experts to Syria’s borders in February and March to gather testimony from Syrians. The team found evidence of violations of international law and international human rights law, including murder, rape, torture, unlawful imprisonment, enforced disappearance and persecution. This work to document abuses is being continued. The team of Syrians that have helped document the el-Houlah massacre were trained by the United Kingdom, and we are working closely with the United States and the UN Commission of Inquiry to ensure that any evidence is collated and stored for use in a future legal process. And we are increasing UK funding for the Syrian opposition and civil society groups, providing £1.5 million of assistance in this financial year to help provide human rights monitoring and media training for activists, and other non-lethal support such as communications equipment.

My Rt Hon Friend the International Development Secretary and his Department are working with the UN and international community to ensure that urgent humanitarian assistance gets to the one million people estimated to be in need. The Syrian regime has now agreed a plan to respond to humanitarian needs. There can be no further delay in its implementation and humanitarian agencies must be allowed full and unhindered access to all areas in Syria. Britain has helped provide emergency food supplies for nearly 24,000 families inside Syria; safe drinking water for 30,000 people, blankets for 5,000 people, medical assistance for up to 25,000 people and support to refugees in neighbouring countries.

The coming weeks must see an intensified and urgent international effort to stop the violence and restore hope to Syria and the British Government remains absolutely focussed on this goal.

If all the efforts I have described fail, then Britain will work with the Friends of Syria Group to increase further the isolation of the regime and to adopt sweeping new sanctions across the world.

We will not rule out any other option which could at any stage stop the bloodshed. And we will not relent in our efforts to ensure the political transition, justice, accountability and security that the Syrian people need and deserve, and to support greater political and economic freedom in the Middle East.

This freedom is not only the legitimate right of all the peoples of the region, it is the foundation of lasting peace, stability and prosperity.

The time has long passed for the Assad regime to stop the killing and torturing of its people, and it is time now for all nations on the UN Security Council to insist on the cessation of violence and political process which remain the only peaceful way to resolve this mounting crisis.”