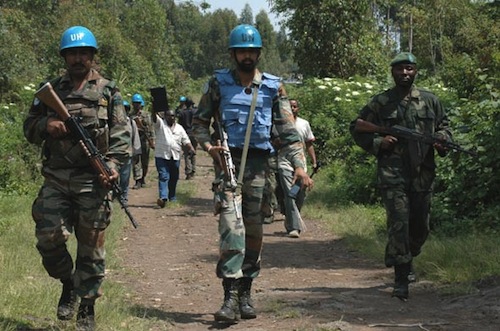 Two senior United Nations officials spoke out over reports of further massacres of civilians, beginning in early August, in the eastern Democratic Republic of the Congo (DRC) – the latest in a series of violent attacks by armed groups systematically targeting civilians in the area.

“The deterioration of the overall security situation in North Kivu following the M23 mutiny and related ruthless attacks against civilians is extremely alarming,” the Secretary-General’s Special Representative for the DRC, Roger Meece, said.

The eastern DRC – particularly its provinces of North Kivu and South Kivu – has been plagued by violence over the past few months. One of the key actors is a group of renegade soldiers known as the 23 March Movement (M23).

The M23 has clashed with national army troops, which have been supported by peacekeepers from the UN Stabilization Mission in the DRC (MONUSCO), and has caused massive displacement of local residents, in addition to raising concerns about the region’s stability.

In addition, on the humanitarian front, the fighting in eastern DRC has uprooted nearly half a million people over the past months, including some 220,000 people in North Kivu province, 200,000 in South Kivu province, and more than 51,000 who have fled to neighbouring Uganda and Rwanda. The M23’s activities have led to condemnation from Secretary-General Ban Ki-moon and the Security Council.

According to a joint press release from MONUSCO and the Office of the UN High Commissioner for Refugees (UNHCR), the UN Joint Human Rights Office in the DRC – known as UNJHRO, and made up of MONUSCO and UNHCR staff – has documented, since May, more than 45 attacks on some 30 villages and towns in the Ufamandu I and II areas, in Masisi territory, in North Kivu province.

UNJHRO has conducted four missions to the remote affected area and carried out dozens of interviews with victims and witnesses.

This has resulted in serious human rights violations, including civilian massacres and the destruction and looting of homes and property, as well as the mass displacement of thousands of civilians.

“Allegations of hundreds of killings are still being verified,” the UN High Commissioner for Human Rights, Navi Pillay, said. “However, the preliminary findings suggest that a significant number of people – most of them women and children – were slaughtered. The sheer viciousness of these murders is beyond comprehension. In some cases, the attacks against civilians may constitute crimes against humanity.”

The attacks on villages by Raïa Mutomboki and FDLR occur in the context of an increase in security vacuums exacerbated by desertions from the Congolese Army (known by the French acronym FARDC) in April, the subsequent creation of the M23, and the redeployment of FARDC units to contain it, MONUSCO and UNHCR said in a joint news release.

They added that many armed groups have also taken advantage of this situation to expand their own area of influence, often carrying out brutal attacks against civilians in the process.

“Proclaiming to protect local populations against the predominantly Hutu FDLR, the Raïa Mutomboki are targeting civilians of Hutu ethnicity whom they consider to be foreigners and allies of the FDLR,” MONUSCO and UNHCR noted. “In turn, the FDLR retaliate against civilian populations they believe to be associated with the Raïa Mutomboki.”

Eastern DRC is home to various ethnic groups, including Hutus. In addition, some 100,000 Rwandans, mainly Hutus, fled to the area in 1994 in the wake of the genocide there, with some of them joining the FDLR.

Pillay has called on all armed groups to immediately cease attacks against civilians and noted the possible consequences for those responsible for such attacks, referring to the recent court case of a former rebel leader, Thomas Lubanga Dyilo. In July, the International Criminal Court (ICC) sentenced the former Congolese warlord to 14 years of imprisonment for his involvement in child soldier recruitment in the early 2000s.

Meece, in turn, has noted with “grave concern” that the M23 mutiny had required MONUSCO and FARDC to divert resources away from some areas. He has also underscored MONUSCO’s recent civilian protection activity in localities most affected by Raïa Mutomboki and FDLR, and reiterated the priority which the peacekeeping mission accords to civilian protection.