UN and G20 can support each other to advance common goals 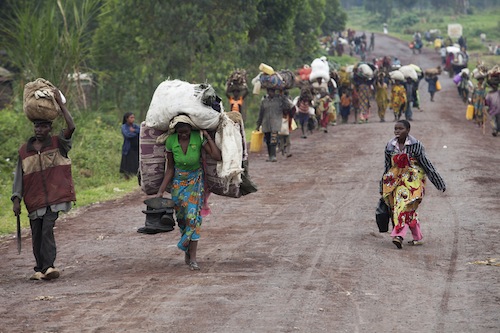 As the General Assembly met yesterday to hear about the outcome of the Group of 20 (G20) summit held in Mexico in June, top United Nations officials highlighted issues on which the two bodies can work together, including employment, nutrition and sustainable development.

“I have always argued that the UN and the G20 can and must work in mutually supportive ways,” said Secretary-General Ban Ki-moon, who has participated in every summit held by the group of leading economies since he took office, beginning with the meeting held Washington, D.C., in 2008.

Ban welcomed the Los Cabos Action Plan for Growth and Jobs, including its measures to address the urgent issue of youth unemployment, and was pleased that the summit acknowledged the importance of ensuring the full participation of women in the labour force.

While at the summit, Ban repeated his call to donor countries to honour all their commitments to the developing world, especially to help them achieve the Millennium Development Goals (MDGs).

Noting that official development assistance fell last year for the first time in more than a decade, the Secretary-General stressed that fiscal austerity must not be allowed to undermine support for poverty reduction and development.

He also thanked G20 leaders for supporting the Scaling Up Nutrition movement, as well as their efforts to address commodity price volatility and enhance transparency in agricultural markets. In addition, he encouraged further progress towards reviving the Doha round of trade talks, and warned against the disturbing rise in protectionist measures.

Ban added that the synergies between the Los Cabos summit and the UN Conference on Sustainable Development (Rio+20), held in Brazil in June, benefited both and advanced the cause of sustainable development. “Looking forward, I encourage G20 countries to align their work programme with the outcome of Rio+20,” he stated. “We must also all work together to define a post-2015 development agenda.”

To that end, Ban announced the full membership of the High-level Panel of Eminent Persons to advise on planning for post-2015 that he set up in May. The panel – co-chaired by President Susilo Bambang Yudhoyono of Indonesia, President Ellen Johnson Sirleaf of Liberia and Prime Minister David Cameron of the United Kingdom – will hold its first meeting at the end of September in the margins of the General Assembly’s annual General Debate.

Addressing the same meeting, the President of the Assembly, Nassir Abdulaziz Al-Nasser, said that the Los Cabos Summit had particular significance for the UN, especially given that it was held back-to-back with Rio+20.

“Inevitably, those two high-level meetings were mutually influential. This is how it should be – there should always be an intense exchange of information, coordination and cooperation between the G20 and the United Nations,” he stated.

Al-Nasser noted that important progress was made on several fronts, including galvanizing international support for the Euro Zone; advancing the reform of the International Monetary Fund; and improving the Framework for Strong, Sustainable and Balanced Growth.

“However, as the aftermath of the international economic crisis continues, challenges remain in the coming months,” he added.