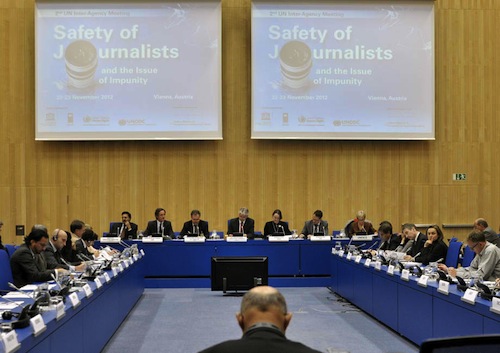 During a United Nations-led meeting in Vienna, the world body and its partners today renewed their pledge to improve safety for journalists and prosecute those who commit acts against them through a new plan to protect media workers.

More than 100 journalists have been killed so far this year, making 2012 the deadliest year for media since the UN Educational, Scientific and Cultural Organization (UNESCO) began keeping records on the issue.

The new action plan outlines more than 100 areas of work that different UN agencies and civil society groups intend to contribute to securing the safety of journalists, and will operate at the national and global level.

Activities that will be implemented as a result of the plan include: helping governments develop laws on safeguarding journalists, raising awareness so that citizens understand the damage done when a journalist’s rights to freedom of expression is curtailed, providing training courses for journalists in safety and safety online, establishing real-time emergency response mechanisms and strengthening the safety of journalists in conflict zones, among others.

The plan also calls for enhancing protection for women journalists in response to the increasing incidence of sexual harassment and rape, decriminalizing defamation offences and encouraging adequate remuneration for full-time and freelance employees.

The Under-Secretary-General for Communications and Public Information, Peter Launsky-Tieffenthal, emphasized that attacks on media workers have a far-reaching effect on society, threatening to silence all citizens.

“These attacks – not only the many murders and physical assaults, but also the countless abductions, the acts of harassment, the illegal arrests, the arbitrary detentions – have an impact that reaches well beyond the personal suffering of the person involved,” he said.

“They aim to silence the journalist and, by extension, all of us.”

Civil society delegates issued a statement during the UNESCO-organized meeting welcoming and endorsing the new plan. They also recommended that it be implemented in a comprehensive manner in Iraq, Nepal, Pakistan, South Sudan and Latin America.

The action plan is the result of a process that began in 2010, on the request of the Intergovernmental Council of UNESCO’s International Programme for the Development of Communication (IPDC). It was endorsed by the UN Chief Executives Board on 12 April 2012.