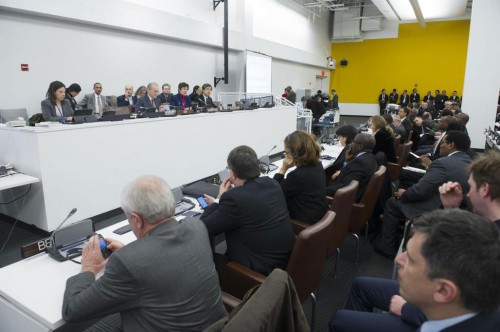 The United Nations General Assembly has approved a global arms trade treaty that failed to achieve unanimous support last week but garnered the support of a majority of Member States when put to a vote on Tuesday.

The resolution containing the text of the treaty, which regulates the international trade in conventional arms, received 154 votes in favour. Three Member States – Democratic People’s Republic of Korea (DPRK), Iran and Syria – voted against the decision, while 23 countries abstained.

Tuesday’s  action follows the failure last Thursday of the Final UN Conference on the Arms Trade Treaty (ATT) to reach an agreement among all 193 Member States on a treaty text at the conclusion of its two-week session.

The adoption of the treaty was welcomed by several UN officials, including Secretary-General Ban Ki-moon, who hailed it as a powerful new tool in efforts to prevent grave human rights abuses, and added that it will provide much-needed momentum for other global disarmament and non-proliferation efforts.

“It is a historic diplomatic achievement – the culmination of long-held dreams and many years of effort,” he said in a statement issued after the Assembly’s action. “This is a victory for the world’s people.”

Once the text was rejected Thursday evening, a Member State introduced a General Assembly draft resolution that same evening, according to the Office of the President of the Assembly.

Unlike in the Conference, where all 193 Member States had to agree on the final text, the Assembly needed only a simple majority, or 97 votes, to pass the text. The treaty will enter into force 90 days after ratified by the 50th signatory.