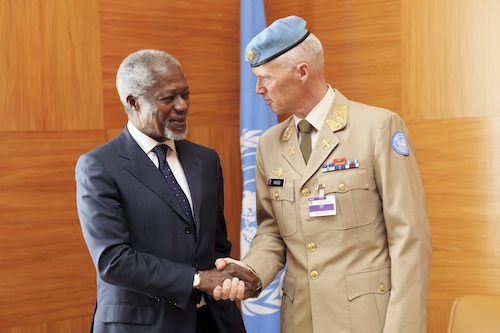 The Joint Special Envoy of the United Nations and the League of Arab States, Kofi Annan, yesterday warned of the growing sectarian violence in Syria, adding that the conflict is already having serious consequences in the region and calling on the international community to work together to push for the implementation of the six-point peace plan.

“The specter of all-out civil war, with a worrying sectarian dimension, grows by the day,” Mr. Annan told the Arab Ministerial Committee on Syria in Doha. “The crisis is having regional spillover, in the form of tensions and incidents across the border, abductions of nationals and foreigners, and refugee flows to neighbouring states.”

Mr. Annan stressed that during his meeting with Syrian President Bashar Al-Assad in Damascus earlier this week, he had urged him to act immediately to implement the six-point plan, and to honour his commitment to withdraw heavy weapons and cease all violence.

“The situation is complex, and it takes everyone involved in the crisis to act responsibly if the violence is to stop. But the first responsibility lies with the Syrian Government, and with President Assad,” Mr. Annan said. “He must release detainees, fully open up to international humanitarian assistance, and allow people to express their views freely in peaceful protest. This is essential to demonstrate his seriousness to the Syrian people and the international community.”

Mr. Annan emphasized the importance of the international community acting in unity to be able to put pressure on the Syrian Government and all other parties to the conflict to stop the violence, and prevent it from spreading further.

“Let me appeal to all of you to engage earnestly and seriously with all other stakeholders, mindful that if regional and international divisions play out in Syria, the Syrian people and the region – your region – will pay the price,” Mr. Annan said.

“The time is coming, if it is not already here, for a serious review. The international community must decide what it does next. From my consultations with many actors, I sense a clear recognition that things cannot continue as they are. I agree. The international community must work together more effectively to push for implementation of the six point plan in full. We must think this through and we must get it right,” he added.

Mr. Annan will travel to New York next week to brief the General Assembly and the Security Council on 7 June.

Earlier this week, Mr. Annan said that the crisis had reached a “tipping point” after the massacre in the Syrian village of Houla, which resulted in the killings of 108 people, including 49 children.

On Friday, the UN Human Rights Council asked its Commission of Inquiry on Syria – a UN independent panel probing abuses in the Middle Eastern country – to conduct a “transparent, independent and prompt investigation into violations of international law with a view to hold to account those responsible for widespread, systematic and gross human rights violations, including violations that may amount to crimes against humanity.” In addition, the Council asked the Commission of Inquiry to publicly identify, if possible, those responsible for the atrocities.