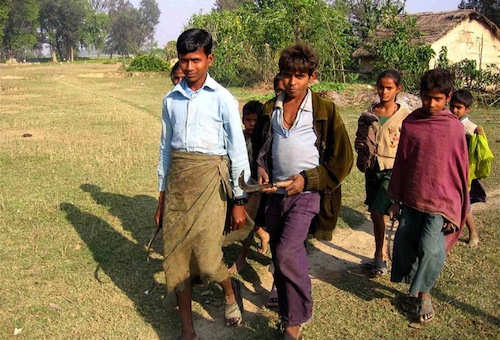 The United Nations has welcomed the release of 42 children by the Myanmar Armed Forces, known as the Tatmadaw, and called for accelerating the discharge of remaining children within the ranks of the army.

The children were released to their families in the presence of senior Government officials as well as representatives from the UN Children’s Fund (UNICEF) and the office of the UN Resident Coordinator in Myanmar.

By the terms of an action plan signed with the UN last year, the Myanmar Government has agreed to locate all children recruited by the Tatmadaw with a view to ensuring their unconditional release, and committed to discharging and facilitating their quick reintegration back into their families and their communities.

“We expect the Tatmadaw will now be in a position to speed up the release of all children,” said UN Resident Coordinator Ashok Nigam. “We are very happy for the 42 children and their families today but we must accelerate efforts so that many more children benefit from release.”

The action plan also includes commitments to allow UN monitoring teams to access military facilities and to training military personnel on how to better protect, respect and promote the rights of Myanmar’s children.

“All parties recognize this is about the future of Myanmar. No child should have to endure the hardship of being taken away from their families, friends, schools and communities,” said Mr. Nigam.

“Nothing justifies the recruitment of children in armed forces. An army is not a place for a child to grow up. We will continue working with the Myanmar Government and the Tatmadaw towards expanding access for UN monitoring teams, addressing identified systemic procedural weaknesses, and mobilizing the Myanmar public in support of ending this practice for the sake of their children and the whole country,” he added.

The UN Resident Coordinator’s Office and UNICEF are the co-chairs of the UN Country Task Force charged with facilitating Myanmar’s implementation of Security Council resolution 1612 in the country together with representatives from other members of the Task Force.

Adopted in 2005, resolution 1612 asked the Secretary-General to establish a monitoring and reporting mechanism to provide timely and reliable information on six grave children’s rights violations, including the recruitment and use of children in armed forces and armed groups.

The six grave violations monitored and reported are: killing or maiming of children; recruitment and use of children in armed forces and groups; attacks against schools or hospitals; rape or other grave sexual violence; abduction of children; and denial of humanitarian access for children.

In his recent report to the Council on children and armed conflict in Myanmar, Secretary-General Ban Ki-moon welcomed the fact that, while children are still being recruited into the Tatmadaw following the signing of the action plan, the number of new recruits have decreased.

“Through today’s discharge and by moving away from recruiting new children, the Myanmar Government and its armed forces continue to demonstrate their desire to end this deeply saddening practice,” said UNICEF Representative Bertrand Bainvel.

“The action plan continues to be a unique opportunity to once and for all ensure that the Tatmadaw is a child-free armed force and is removed from the annex of the Secretary-General’s report, which lists parties to the conflict that recruit and use children,” Mr. Bainvel added.

The Tatmadaw (together with its integrated border guard forces) is listed in Annex 1 of the Secretary-General’s report, alongside seven other non-State armed groups that are persistent perpetrators in Myanmar.