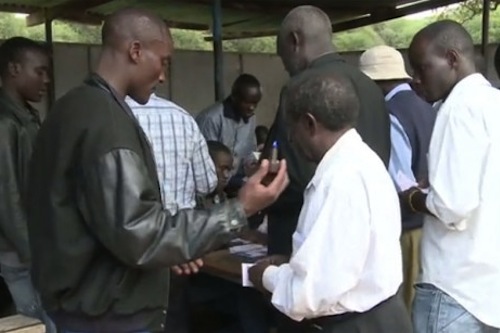 Secretary-General Ban Ki-moon has noted the results of Kenya’s presidential election that were announced today and applauded its citizens for the largely peaceful polls.

“He congratulates the people of Kenya for their impressive determination to participate peacefully in the elections, and for the patience they have demonstrated while awaiting the results,” his spokesperson said in a statement.

According to media reports, Kenya’s Independent Electoral and Boundaries Commission (IEBC) announced that Uhuru Kenyatta had narrowly avoided a run-off by winning 50.07 per cent of votes in a credible and transparent poll. Voter turnout in the 4 March election was reportedly the largest ever in the country, at 86 per cent.

Mr. Ban spoke by phone yesterday with Mr. Kenyatta and the other candidate, Raila Odinga.

“He reiterated his call for both leaders to send clear messages of calm to their supporters, and he reminded them of the commitments they have made throughout this process to channel any electoral grievances through the established legal avenues,” said Mr. Ban’s spokesperson.

“He therefore welcomes the measured statements both have made since the announcement of results. Kenyans are depending at this time on wise and responsible leadership.”