Posted on: March 18th, 2012 by AlYunaniya Staff No Comments 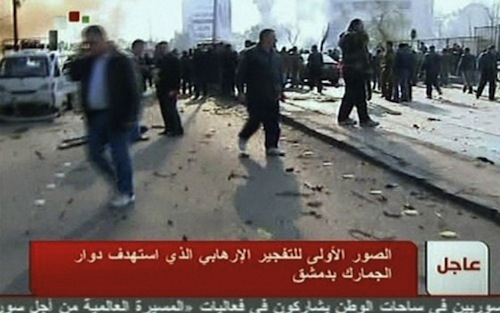 Secretary-General Ban Ki-moon has strongly condemned the twin bomb attacks that rocked the Syrian capital yesterday, according to a UN announcement. Attacks left 27 people dead and 140 injured, according to Syrian Health minister, Wael al-Halaqi who talked to Syria News, an official television channel.

State-run SANA agency blamed “terrorist gangs” for the Saturday explosions and reported detonated vehicles packed with explosives had been used. Most of the casualties were civilians, state television said. The channel broadcast interviews with Syrians who held responsible for the explosions, the United States and Gulf nations, including Saudi Arabia and Qatar, who they said had sent terrorists.

The attacks come two days after the one-year anniversary of the start of the uprising against Syrian President Bashar al-Assad.

It was not the first time bombers have struck in Damascus, the heart of Assad’s power base. There were three alleged suicide bombings in the capital between December and January, which the government blamed on al-Qaeda.

Ban Ki-moon extended his sympathy and condolences to the families of the victims and the people of Syria and called for an immediate end to the violence while yesterday, the Joint Special Envoy of the United Nations and the League of

Arab States for Syria, Kofi Annan, said he would send a team to the country to continue negotiations on proposals he has presented to the leadership as he tries to find a peaceful solution to the year-long bloody crisis.