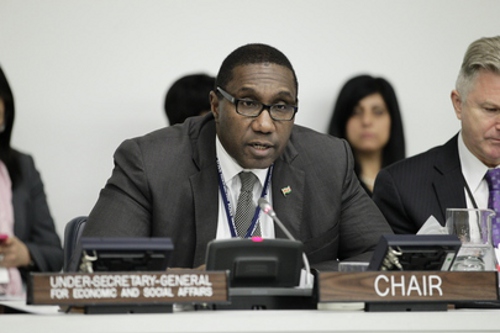 During the UN Sixty-seventh General Assembly Third Committee meeting held from 24th to 25th October, a United Nations expert called for boycotting businesses that were profiting from Israeli settlements on occupied Palestinian lands.

As reported by the Department of Public Information, the expert called for the action to be continued until Israel brought its operations in line with international human rights and humanitarian law.

Richard Falk, the Human Rights Council’s Special Rapporteur on the situation of human rights in the Palestinian territories occupied since 1967, also encouraged civil society to bolster efforts to hold those businesses accountable through legal and political initiatives at the national and international levels. He also drew attention to important developments in international law concerning businesses and human rights, including the United Nations Guiding Principles on Businesses and Human rights and the United Nations Global Compact.

“Businesses should not breach international humanitarian law provisions,” he commented. They might otherwise be subject to criminal or civil liability.

As Falk was preparing his report, he received information from civil societies documenting the involvement of businesses in Israeli settlements. He stated that the companies highlighted in the report constitute a small number of the many which are profiting from the Israeli settlement enterprise. His report also recommended that an advisory opinion should be sought from the International Court of Justice, particularly on the responsibility of businesses in relation to and in violation of the Fourth Geneva Convention:

“The scale of Israel’s settlement enterprise, especially the massive financial investment in it, appears to confirm Israel’s intention to retain control over much, if not all, of the West Bank, including East Jerusalem. Between 500,000 and 600,000 Israeli citizens had already been settled in Palestinian territory, 200,000 of whom had settled in East Jerusalem. In the last year alone, the settler population had increased by over 15,000 people.”

At this point it is unclear if the UN will embrace, and under which course of action, the United Nations expert called for boycotting businesses that are profiting from Israeli settlements on occupied Palestinian lands.