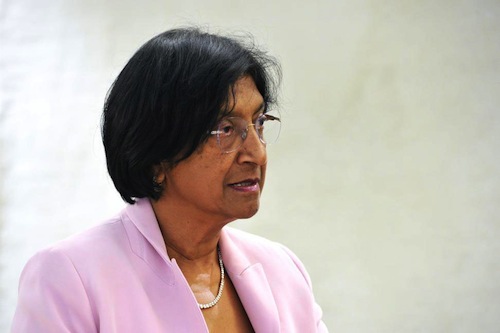 The mutilation of a Syrian soldier purportedly shown in an internet video is a “truly atrocious act” which should be investigated as a potential war crime, the United Nations human rights chief said, urging the armed opposition to stop such gross crimes.

“The video that has just emerged from Syria, apparently showing a rebel leader cutting out and biting the heart of a dead soldier, depicts a truly atrocious act,” UN High Commissioner for Human Rights Navi Pillay said in comments from Geneva, noting that it is not yet possible to fully authenticate the clip.

“Mutilating or desecrating corpses during a conflict is a war crime,” Ms. Pillay stressed. “I urge the armed opposition groups in Syria to do everything in their power to halt such gross crimes.”

The High Commissioner urged an investigation of the incident, along with other alleged very serious violations by opposition fighters, including acts of torture and a succession of apparent summary executions and extra-judicial killings.

“I have repeatedly called for the case of Syria to be referred by the Security Council to the International Criminal Court, so that legal proceedings can begin against people believed to be responsible for serious international crimes, including war crimes and crimes against humanity, irrespective of whether they are on the side of the Government or are in opposition to it.”

Since 2011, fighting between the Government and opposition forces seeking to oust President Bashar Al-Assad has killed more than 70,000 people, and left 6.8 million in need.