UN Humanitarian Chief: ‘Don’t let the people of Syria down’ 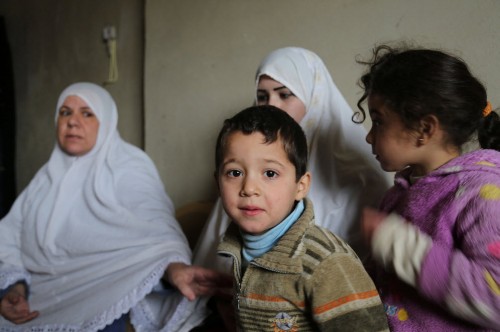 Over half of Syria’s public hospitals have been damaged and those that are open lack basic supplies such as antibiotics and pain killers. One in five schools has either been destroyed or is being used as a shelter for displaced families.

“The situation is getting worse every day and the widespread violence is having a devastating impact on the lives of ordinary Syrian women, men and children,” warned the humanitarian chief.

UN agencies and humanitarian partners have started stepping up assistance across the conflict lines. The World Food Programme began scaling up its food distribution to reach 1.75 million people this month, about half of them in opposition-controlled or contested areas. Working with more local partners, it aims to reach about 2.5 million people by April. UNICEF and the World Health Organization with their partners have vaccinated more than a million children against polio and measles, many in areas held by opposition groups. UNHCR distributed blankets, mattresses and household goods to over 400,000 people last year. About 40,000 children in conflict areas now have access to education and psycho-social support to cope with the crisis.

The Syrian Government recently authorized three additional international NGOs – Merlin, Mercy Corps and the Norwegian Refugee Council – to work in Syria but this brings the total to just eleven, said Ms. Amos. “We are crossing conflict lines, negotiating with armed groups on the ground, to reach more people in need but we are not reaching enough of those who require our help. Limited access in the north is a major problem that we can only solve using alternative methods of aid delivery.”

Last Saturday (16 Feb), a UN inter-agency mission delivered the first batch of critical, life-saving relief supplies including food, clothes, mattresses and blankets to about 6,000 internally displaced people in Syria’s north-western province of Idleb, where nearly 50,000 people are said to be living in makeshift shelters exposed to harsh winter conditions.

“The joint relief convoy, including eight UN agencies, shows that outreach is possible from inside Syria,” said Regional Humanitarian Coordinator for Syria Radhouane Nouicer. “It encourages us to continue to increase our efforts to reach more people in need across the country.” More inter-agency missions and aid convoys are expected to arrive in the area shortly to assist some 25,000 people.