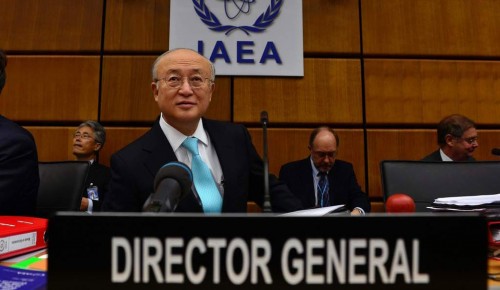 Discussions between the United Nations and Iran on clarifying outstanding issues related to the country’s nuclear programme are “going around in circles,” the head of the International Atomic Energy Agency (IAEA) reported today

“Despite the intensified dialogue between the Agency and Iran since January 2012, during which time 10 rounds of talks have been held, no agreement has been reached,” Director General Yukiya Amano told the Agency’s Board of Governors at a meeting in Vienna.

“To be frank, for some time now, we have been going around in circles. This is not the right way to address issues of such great importance to the international community, including Iran,” he stated.

Mr. Amano said Iran is not providing the necessary cooperation to enable the IAEA to provide credible assurance about the absence of undeclared nuclear material and activities. “The Agency therefore cannot conclude that all nuclear material in Iran is in peaceful activities,” he said.

“Iran continues to advance its heavy water-related projects. The number of centrifuges installed by Iran also continues to increase, as does the amount of enriched uranium it holds,” he continued. “These activities are in clear contravention of resolutions adopted by the Board of Governors and the United Nations Security Council.”

Iran’s nuclear programme – which its officials have stated is for peaceful purposes, but some other countries contend is driven by military ambitions – has been a matter of international concern since the discovery in 2003 that the country had concealed its nuclear activities for 18 years in breach of its obligations under the Nuclear Non-Proliferation Treaty (NPT).

“We need to achieve concrete results without further delay to restore international confidence in the peaceful nature of Iran’s nuclear activities,” he stated. “In order to achieve that objective, the Agency has made clear its view of the elements which the structured approach should contain.

“First and foremost, Iran has to address the Agency’s requirement to conduct effective verification. Unless Iran does so, it will not be possible for the Agency to resolve outstanding issues, including those relating to possible military dimensions to Iran’s nuclear programme.”

He called on Iran to engage with the Agency to achieve concrete results in resolving all outstanding issues “with a sense of urgency.”

Mr. Amano also told the 35-nation Board that he remains concerned about the situation in the Democratic People’s Republic of Korea (DPRK), particularly since its announcement of a third test of a nuclear weapon in February.

“Once again, I strongly urge the DPRK to fully implement all relevant resolutions of the Security Council, the IAEA General Conference and the Board of Governors,” said Mr. Amano.

“I reiterate my call for the DPRK to fully comply with the NPT and to cooperate promptly and fully with the Agency. The IAEA remains ready to contribute to the peaceful resolution of this issue by resuming its nuclear verification activities once political agreement is reached among the countries concerned.”

The Board of Governors, one of the Agency’s main policy-making bodies, meets five times a year at the IAEA headquarters in Vienna. It is meeting to discuss the IAEA’s work on nuclear verification, safety, security and the peaceful use of nuclear technologies.