Posted on: April 19th, 2012 by AlYunaniya Staff No Comments 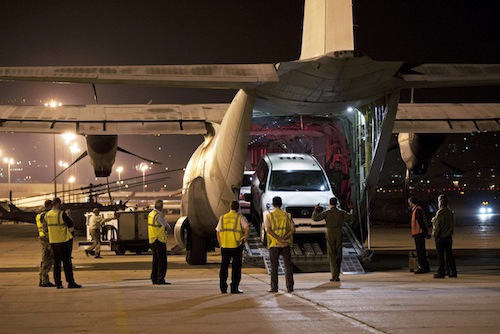 The first international observers tasked with monitoring a tenuous United Nations-backed ceasefire have arrived late on Sunday evening in Syria, where activists said government forces were continuing to attack opposition neighborhoods, Aljazeera reported. The six observers were part of an initial batch of 30 UN monitors due to enforce the ceasefire. The UN says the final observer mission will involve about 250 monitors.

Ahmed Fawzi, a spokesman for Annan, said the UN Security Council would be asked to approve deployment of the full mission, assuming the ceasefire held, based on a report by UN chief Ban Ki Moon next week.

“The mission will include civilians, political officers and human rights experts in order to observe the full implementation of the six-point plan, which includes a lot more than the cessation of hostilities,” he said.

Meanwhile, Secretary-General Ban Ki-moon yesterday voiced serious concern over the shelling of the Syrian city of Homs during the weekend and once again demanded that all parties abide by the cessation of violence deal.

US envoy to UN also said in a statement that the shelling in Homs saying that it is “absolutely” a violation of the ceasefire.

According to YouTube videos uploaded by rebels, the city of Homs has been undergoing some very heavy shelling ,since early in the morning, targeting most of its districts. Military helicopters were heard and spotted flying in the city’s skies

The state-run SANA news agency said that the government welcomed the observer mission, and hoped that the monitors would document the “crimes” committed by “armed terrorist groups” in the country.

The Syrian government said that it would not be responsible for the safety of the monitors, however, unless it was involved in “all steps on the ground”, Bouthaina Shaaban, a spokesperson and presidential adviser, said.

Walid Muallem, the country’s foreign minister, meanwhile, was due to discuss bilateral relations and the mission of the UN Envoy to Syria Kofi Annan with Yang Jiechi, his Chinese counterpart, SANA reported.