Posted on: February 18th, 2013 by AlYunaniya Staff No Comments 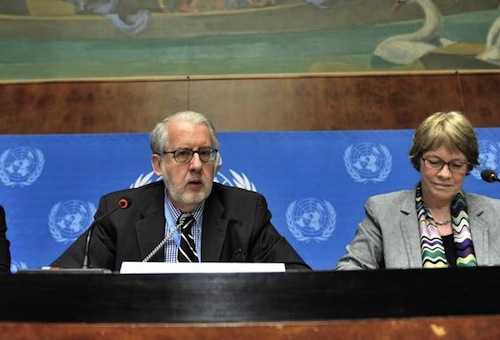 A United Nations independent panel investigating human rights violations in Syria called for urgent action to ensure justice for the crimes committed, adding that it will submit a list of names next month of those believed to be most responsible for the atrocities.

“The situation of human rights in the Syrian Arab Republic has continued to deteriorate,” the UN Commission of Inquiry on Syria stated in its latest report, which was released in Geneva.

“Since 15 July 2012, there has been an escalation in the armed conflict between Government forces and anti-Government armed groups. The conflict has become increasingly sectarian, with the conduct of the parties becoming significantly more radicalized and militarized.”

The Commission – which comprises Paulo Sergio Pinheiro, Karen AbuZayd, Carla del Ponte and Vitit Muntarbhorn – has been mandated by the Geneva-based Human Rights Council to investigate and record all violations of international human rights law in Syria, where possibly up to 70,000 people, mostly civilians, have been killed since the uprising against President Bashar al-Assad began in March 2011.

“There is a need to act urgently to ensure that there is justice for the crimes committed,” the panel stated in its report.

“By collecting first-hand information and documenting incidents, the Commission is laying the foundation for accountability, whether at the national, regional or international levels. In March 2013, a confidential list of individuals and units believed to be responsible for crimes will be submitted to the United Nations High Commissioner for Human Rights,” it said.

Although the Government has yet to allow the Commission to undertake investigations inside Syria, the 445 interviews conducted from 15 July 2012 to 15 January 2013 found that large parts of the country are scenes of “continuous combat, involving more brutal tactics and new military capabilities on all sides,” according to a news release on the report.

“The war has taken on sectarian overtones, permeated by opportunistic criminality, and aggravated by the presence of foreign fighters and extremist groups.”

According to the report, Government forces and affiliated militia committed the crimes against humanity of murder, torture, rape, enforced disappearance and other inhumane acts. War crimes and gross violations of international human rights and humanitarian law – including arbitrary arrest and detention, unlawful attack, attacking protected objects, and pillaging and destruction of property – were also committed.

Anti-Government armed groups have committed war crimes, including murder, torture, hostage-taking and attacking protected objects, the report continued. They continue to endanger the civilian population by positioning military objectives inside civilian areas. Where armed groups carried out bombings in predominantly civilian areas, it had the effect of spreading terror and amounted to the war crime of attacking civilians.

“The violations and abuses committed by anti-Government armed groups did not, however, reach the intensity and scale of those committed by Government forces and affiliated militia,” the panel added.

“Ensuring the accountability of all parties for crimes committed is imperative,” stated the Commission, which outlined a series of detailed recommendations – to the Syrian Government, anti-Government armed groups, the international community, the Human Rights Council and the Security Council – and emphasized the need to counter a “growing culture of impunity,” including through referral to the International Criminal Court (ICC).

The Commission highlighted the urgent need for the parties to the conflict to commit to a political settlement to end the violence, which has left some four million people in Syria, including at least two million internally displaced persons (IDPs), in need of humanitarian aid.

UN humanitarian agencies and their partners are reaching more and more people inside the country with assistance. Over the weekend, an inter-agency mission delivered a first batch of critical relief items to 6,000 IDPs in Karameh in north-western Idlib province, the UN Office for the Coordination of Humanitarian Affairs (OCHA) reported.

“This joint relief convoy, involving eight UN agencies, demonstrates that outreach is possible from inside Syria,” said Radhouane Nouicer, the Regional Humanitarian Coordinator for Syria. “It encourages us to continue to increase our efforts to reach more people in need across the country.”

Separately, the UN also delivered a significant quantity of medical supplies to Aleppo and much-needed winter items and hygiene kits to Hama, where recent fighting resulted in large-scale displacement in rural areas.