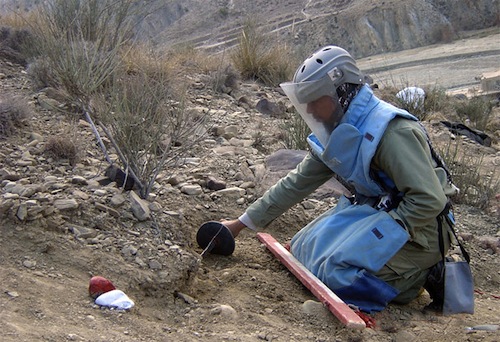 Secretary-General Ban Ki-moon reiterated the importance of eliminating the threat of mines and explosive remnants of war as a crucial endeavour that advances peace, enables development, supports nations in transition and saves lives. “United Nations mine action programmes continue to create space for humanitarian relief efforts, peace operations and development initiatives, allowing UN staff to deploy and refugees and internally displaced persons to return voluntarily to their homes,” he said in a message to mark the International Day of Mine Awareness and Assistance in Mine Action, marked annually on 4 April.

As highlighted by Ban, the UN continues to provide wide-ranging assistance to millions of people in 59 States and six other areas contaminated by landmines, including Afghanistan, Cambodia, Colombia, Laos, Lebanon and South Sudan. “But more progress is needed,” he warned, most notably in Syria and Mali, where the devastating humanitarian impact of the use of explosive weapons in populated areas is growing.

Between May 2011 and May 2012, at least 4,286 people were killed or injured in incidents related to mines and explosive remnants of war, according to the UN Mine Action Service (UNMAS).

Governments of mine-affected countries which receive UN assistance have the primary responsibility for mine action, UNMAS noted.

There are 14 UN departments, programmes, funds and agencies that provide various types of services, according to the agency. Some of these UN bodies target their services to a particular group of people, such as refugees, or to a special circumstance, such as a humanitarian crisis.

At the end of 2012, these entities agreed on a new strategy to guide UN mine action work through 2018. The new strategy includes for the first time a specific monitoring and evaluation framework to track and measure UN’s work.

The new strategy, Ban said, “sets out a series of steps towards a safer world where individuals and communities can pursue socio-economic development and where survivors are treated as equal members of their societies.”

At a press conference in New York, the Assistant Secretary-General of the Office of the Rule of Law and Security Institutions (OROLSI), Dmitry Titov, stressed to journalists that “mine action is about action” that includes humanitarian action and the removal of mines.

Also speaking to the media, the Chief of UNMAS Programmes, Paul Heslop, said “the battle against mines has been won” but needs sustained funding and international support to sustain it.

He noted the emerging threat caused by abandoned or poorly managed ammunition depots which UNMAS teams are increasingly encountering.

Heslop also spoke about the difficulties of identifying the origins of a landmine or unexploded ordinance, particularly in areas such as Syria where the insecurity prevents demining teams from working, and determining whether it is a new explosive or a legacy from earlier conflicts. If explosive materials had a stamp which read “produced in 2010 in x location, it would be easy, but they don’t,” he said.