Posted on: August 15th, 2013 by AlYunaniya Staff No Comments

UN strongly condemns use of force against protesters in Cairo 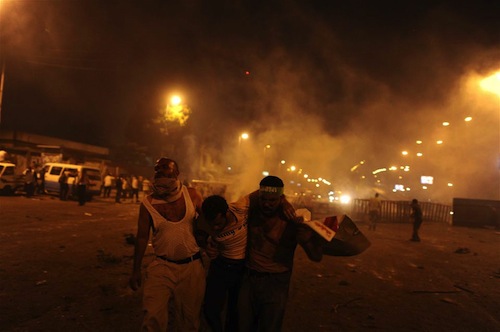 Secretary-General Ban Ki-moon condemned in the strongest terms the violence that occurred today in Cairo when Egyptian security services used force to clear sit-ins and demonstrations, and urged all Egyptians to focus on promoting inclusive reconciliation.

The crackdown comes just days after Ban renewed his call for all sides in Egypt to reconsider their actions in light of new political realities and the imperative to prevent further loss of life.

“The Secretary-General regrets that Egyptian authorities chose instead to use force to respond to the ongoing demonstrations,” his spokesperson said in a statement.

While the UN is still gathering precise information about today’s events, the statement said it appears that hundreds of people were killed or wounded in clashes between security forces and demonstrators demanding the reinstatement of deposed President Mohamed Morsy.

Ban extended his condolences to the families of those killed and his wishes for a full and speedy recovery to those injured. “In the aftermath of today’s violence, the Secretary-General urges all Egyptians to concentrate their efforts on promoting genuinely inclusive reconciliation,” his spokesperson said.

“While recognizing that political clocks do not run backwards, the Secretary-General also believes firmly that violence and incitement from any side are not the answers to the challenges Egypt faces,” he continued.

Ban knows that the vast majority of the Egyptian people are weary of disruptions to normal life caused by demonstrations and counter-demonstrations, and want their country to go forward peacefully in an Egyptian-led process towards prosperity and democracy, the statement added.

Given the country’s rich history and diversity of views and experiences, it is not unusual for Egyptians to disagree on the best approach forward, it further noted.

“What is important, in the Secretary-General’s view, is that differing views be expressed respectfully and peacefully,” the spokesperson said, adding that to Mr. Ban’s regret, “that is not what happened today.”

Egypt has been undergoing a democratic transition following the toppling of President Hosni Mubarak two years ago in the wake of mass protests. Last month, renewed protests – in which dozens of people were killed and wounded – led to the Egyptian military deposing Morsy. The Constitution was then suspended and an interim government set up.