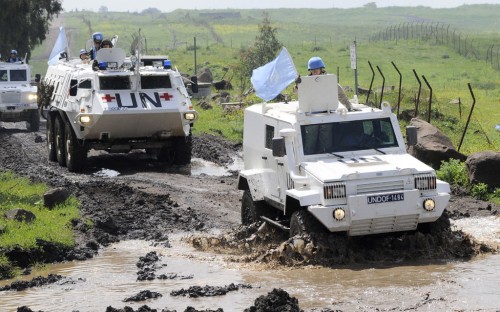 The United Nations hopes to retrieve 21 peacekeepers from Syrian rebels on Saturday during a two-hour truce agreed to by Syrian and opposition forces.

According to the Syrian observatory for Human Rigths (SOHR) a spokesperson of the rebel battalion holding the UN Disengagement Observer Force (UNDOF) members in the town of al-Jamla said that an agreement had been reached to free the 21 International observers tomorrow (Saturday) morning between 10 a.m and noon.

“A precondition to the release of the hostages is that the area should witness a ceasefire, with regime forces stopping their bombardment. A delegation from the Red Cross and the United Nations will be in the area tomorrow morning,” SOHR said in a statement.

“As of now there is, perhaps, a hope – but I have to be extremely cautious because it is not done yet – but there is the possibility that a ceasefire of a few hours can intervene which will allow for people to be released,” Under-Secretary-General for Peacekeeping Operations Hervé Ladsous, told reporters in New York after a closed-door briefing to the Security Council.

He stressed that if the ceasefire was to happen, there would be a strong expectation that there would be no retaliatory action by the Syrian armed forces over the village and its civilian population.

“Our 21 peacekeepers are detained in the village of Al Jamla. Apparently they are safe and they have been spread into 4 or 5 locations within that village in the basement of various houses,” Ladsous, told reporters in New York.

“That particular village is subject to intense shelling by the Syrian armed forces. Of course we are working 24/7 in the area of operation, with people in the region, and here in the Secretariat, to secure their release under good conditions as quickly as possible.”

Mr. Ladsous added that in light of the situation, UNDOF had vacated two positions which were particularly exposed to gunfire, and the way the mission is operating is being examined due to the degraded safety and security conditions.