UN urges protection of children from violence in Syria 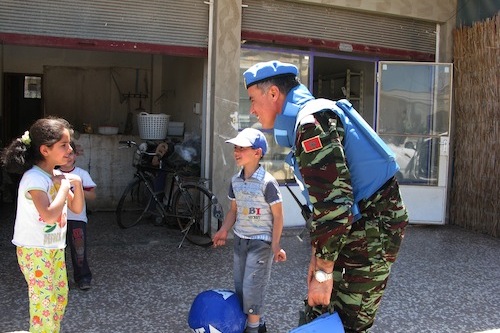 The United Nations envoy for children and armed conflict today said she was alarmed by another wave of extreme violence which had resulted in the deaths and injuries of children across Syria and called on all parties to ensure their protection.

“I urge all parties in Syria to refrain from indiscriminate tactics resulting in the killing and wounding of children,” said the Special Representative of the Secretary-General for Children and Armed Conflict, Radhika Coomaraswamy, in a news statement. “It is the responsibility and humanitarian imperative of all parties to protect and prevent unnecessary suffering of girls and boys.”

A truce was agreed on 12 April between the Syrian Government and the opposition. One week later, the Security Council authorized the establishment of UNSMIS, an observer mission made up of up to 300 unarmed military observers and deployed for an initial period of 90 days, to monitor the cessation of violence in Syria. However, despite the deployment of UN ceasefire monitors, more than 34 children have allegedly been killed.

“Reports indicate that two children were killed today in a mortar attack. In recent days, at least one child was killed during anti-Government protests, and the dead body of a girl was retrieved from the rubble of a collapsed house in Hama,” Coomaraswamy said.

Yesterday, Secretary-General Ban Ki-moon condemned a series of recent suicide attacks which rocked Damascus, the capital, and the city of Idlib, which resulted in further child causalities.

The violence in Syria, which began in March 2011 as a protest movement similar to those across the Middle East and North Africa, has claimed over 9,000 lives, mostly civilians, and displaced tens of thousands.