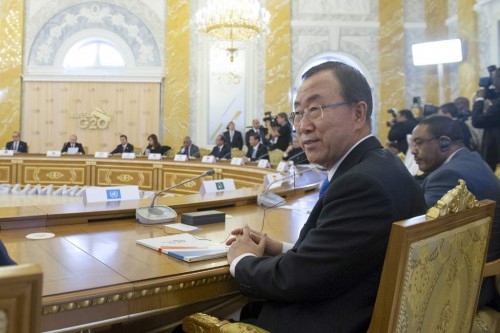 United Nations Secretary-General Ban Ki-moon has strongly welcomed the emergence of “serious international discussions” that could lead to an agreement in the UN Security Council to secure and destroy Syria’s chemical weapons.

Mr. Ban’s statement follows a flurry of diplomatic activity noted by the media in the past 72 hours, following a reported Russian proposal for Damascus to surrender its chemical weapons and place them under international control. In the meantime, evidence collected by a UN team probing possible chemical weapons use in Syria on 21 August is being examined by laboratories in Europe.

In a national address last night, US President Barack Obama cited “encouraging signs in recent days” and announced that he was sending US Secretary of State John Kerry to meet Russian Foreign Minister Sergei Lavrov in Geneva on Thursday for further talks, and that he would continue discussions with Russian President Vladimir Putin.

Both countries are permanent members of the UN Security Council – along with China France and the United Kingdom – which has been deadlocked over a solution to the 30 month crisis in Syria.

The UN chief welcomed the efforts by the Russian Federation to advance a possible agreement. “He hopes the US-Russian meetings later this week will be productive in moving toward a process for addressing the Syrian chemical weapons threat which all parties will be committed to,” the spokesperson said.

“The confirmed use of chemical weapons would be an outrageous crime for which there must be accountability and determined efforts to prevent any recurrence,” the statement said.