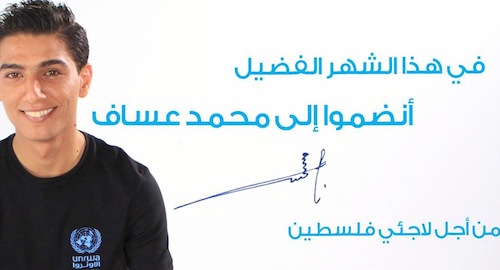 The United Nations Relief and Works Agency for Palestine Refugees in the Near East (UNRWA) announced Monday the launch of a fundraising and awareness campaign for Palestine refugees in Syria and the Gaza Strip during the holy month of Ramadan.

“Working with Arab Idol Mohammed Assaf, the Agency’s Regional Youth Ambassador, UNRWA hopes to highlight the struggles and needs of these vulnerable Palestine refugees,” the UN agency said in a statement.

The campaign, which will be broadcast on MBC1 and advertised on many different media, including social tools like Facebook and Twitter, aims to remind viewers of the difficult situation Palestine refugees in these areas are facing.

“In Syria, the long-running conflict has displaced thousands, while years of conflict and blockade have left the majority of Gazans dependent on international assistance. Despite the difficult political, operational and financial circumstances, UNRWA is committed to providing refugees in both these areas with the support, assistance and protection that they need,” UNRWA said.

Launching the fundraising and awareness campaign, the Agency thanked those supporters who made it possible, including Jawwal, the Bank of Palestine and Al-Wataniya Mobile.

UNRWA spokesperson Sami Mshasha added: “With the support of these valued partners, UNRWA was able to reach out to new audiences. With your support, we will be able to continue and increase our work for and with Palestine refugees in Gaza and Syria.”

Meanwhile winner of Arab Idol, Mohammed Assaf, said: “I have been familiar with UNRWA and its work all my life. I am very proud to be able now to join the Agency in extending a hand to other Palestine refugees in Syria and Gaza.”