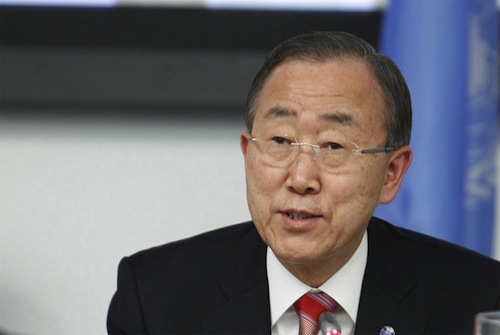 The international conference proposed by Russia and the United States offers the best chance to resolve the crisis that has overwhelmed Syria and threatens to engulf the whole region, and should be held as soon as possible, Secretary-General Ban Ki-moon stressed today.

“There is an urgent need for the violence to end. Far too many lives have been lost already and the conflict has generated a huge and heart-rending humanitarian crisis,” Mr. Ban said as he addressed reporters in Geneva.

“The US-Russian initiative to bring Syrian parties to the negotiating table is the best chance for a lasting solution that will deliver peace and save lives,” he added. “It is essential that we do everything possible to ensure that this conference takes place as soon as possible. I urge the international community to fully commit to a political process.”

In May, following talks in Moscow between Russian Foreign Minister Sergey Lavrov and US Secretary of State John Kerry, the two countries announced they would work together to achieve a political solution to the Syria crisis, and agreed to convene an international conference aimed at achieving this goal.

It is expected that both the Government side and the opposition groups will send their delegations, Mr. Ban said, while noting that there is a question of who will represent the Syrian people.

He said that the opposition are expected to send a delegation that can “really represent the voices and positions” of opposition groups. “We also expect that the Government delegation will also be fully empowered so that they can fully engage in negotiations with the Joint Special Envoy Lakhdar Brahimi.”

There is also the issue of the scope of participation, particularly Iran and Saudi Arabia. “Member States have not been able to agree on whether and if their voices needed to be heard and in what way,” said Mr. Ban.

More than 93,000 people have been killed, and 1.5 million more have fled to neighbouring countries, since fighting began in March 2011 between the Syrian Government and opposition groups seeking to oust President Bashar Al-Assad.

“The people of Syria want peace and hope. Yet all they see is death upon death. All they hear is talks after talks,” said Mr. Ban.

“People are dying. Families are fleeing. Syria’s fires are spreading. They may soon engulf the whole region,” he warned.

“I once again call on all those with influence to hear the cry of the Syrian people and the call of history: Act and act now.”