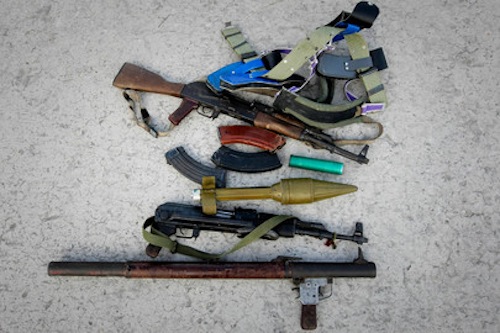 Arms supplied by the world’s major powers are among those contributing to the loss of hundreds of thousands of lives and blighting the livelihoods of millions of people every year, Amnesty International said in a new briefing published just days before final negotiations on a global Arms Trade Treaty open at the United Nations.

Between them, the five permanent members of the UN Security Council – China, France, Russia, the UK and the USA – are responsible for over half of the almost US$100 billion total annual global trade in conventional weapons.

The same five states will be pivotal to finalizing an effective Arms Trade Treaty with strong human rights protections at the conference taking place at the UN from 18-28 March.

All this week in the run-up to that historic meeting, Amnesty International activists and supporters are holding a “Global Week of Action” to call on world leaders to adopt an effective Arms Trade Treaty with strong human rights protections.

“It’s clear that the five permanent members of the UN Security Council are responsible for the lion’s share of arms deals across borders – and so collectively they must shoulder the greatest burden in bringing the poorly regulated global arms trade in check,” said Helen Hughes, researcher on arms transfers at Amnesty International.

The 12-page briefing, Major powers fuelling atrocities, includes examples of arms transfers from each of the five countries to states around the world, where they are likely to be used to commit or facilitate serious violations of international humanitarian and human rights law.

According to the briefing, the USA – by far the world’s largest arms trader – frequently exports “non-standard ammunition” to its friends and allies. Rather than being US-made, these arms and equipment are sourced from abroad – typically from the former Soviet Union and Eastern European companies.

It adds, that a  September 2012 contract between the US military and Yemen lists 1 million rounds of sniper rifle ammunition as well as thousands of RPG rockets and mortar bombs. The USA has become Yemen’s largest supplier of military equipment, and in 2011 delivered arms worth US$4.8 million.

The USA is among countries that have tried to weaken the draft text of the Arms Trade Treaty by seeking to exclude certain types of weapons and ammunition from its scope, Amnesty says.

Amnesty International is pressing for the final treaty to cover all types of weapons and munitions for use in military and internal security operations, as well as related equipment, parts and technology.

“No opt-outs should be allowed, and to be effective, the treaty must have a ‘Golden Rule’ requiring states to halt arms exports when there is a substantial risk the arms will be used to commit or facilitate serious violations of international humanitarian or human rights law,” said Brian Wood, Amnesty International’s Head of Arms Control and Human Rights.

“Also, the treaty should completely ban the transfer of arms that would aid or assist in crimes under international law, including extra-judicial killings, torture and enforced disappearances.”

State-owned companies in China account for the bulk of the country’s exports of conventional arms. In recent years they have shipped to countries including Zimbabwe, Democratic Republic of the Congo and Sudan, the briefing says.

France has sold vehicles that can be militarized (“véhicules civils militarisables”) to Sudan, where they have been used by government-backed Janjaweed militia who have committed gross human rights violations in the country’s Darfur region, according to the briefing.

Syria historically received the majority of its weapons and munitions from the Soviet Union, and has continued to do so from Russia, the world’s second-largest arms trader by value, according to Amnesty.

Since 2011 when protesters were being killed across the country for calling for freedoms and even after the situation escalated into an internal armed conflict between government and opposition forces in July 2012, Russia and China have blocked efforts at the UN to impose an arms embargo and sanctions on Syria.  Amnesty International has documented a range of Russian and Soviet-era arms and military equipment – ranging from aircraft to cluster bombs – being used in Syria.

“While it won’t be a panacea for all of the world’s misuse of arms, if we get a strong Arms Trade Treaty it will be an important step towards achieving much more security and human rights protection for billions of people who today live in fear,” said Wood.