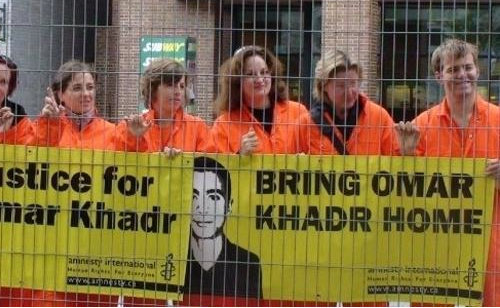 The U.S. government has transferred Omar Khadr the yongest detainee from Guantánamo Bay naval base to his native Canada to serve the remainder of his sentence. The move comes nearly one year after a plea deal made the 26-year old, the prison’s youngest inmate, eligible for transfer.

“The US military’s repatriation of detainee Omar Khadr from the Guantánamo Bay naval base to his native Canada is a small step towards ending the decade-long human rights vacuum at the US-run detention centre,” Amnesty International said on Monday.

Following his transfer to Canada on Saturday, the 26-year-old who was born in Toronto will remain in Canadian custody until he is eligible to apply for parole next summer.

Held by the US military since his detention in Afghanistan at the age of 15 in 2002, Khadr was subjected to torture or other ill-treatment and then prosecuted in Guantánamo’s military commissions system, a system that fails to meet international fair trial standards.  “Khadr’s tragic story underscores why Guantánamo should close – not tomorrow, but today,” said Suzanne Nossel, Amnesty International USA’s executive director. President Obama must live up to his promise to close the book on the Guantánamo chapter and ensure that all detainees are either charged and fairly tried, or released. He must also ensure full accountability and access to remedy for the human rights violations to which the US authorities and other states have subjected detainees. That’s the only way to ensure justice for everyone.”

Despite President Barack Obama’s promise to close Guantánamo within a year of entering office in January 2009, following Khadr’s repatriation, 166 men remain in detention at the US naval base, according to Amnesty.   After the US military began operating the Guantánamo detention centre in January 2002, detainees were denied access to lawyers and the courts for more than two years, and allegations of torture and other ill-treatment of detainees relating to this period have been particularly prevalent. To date, only one detainee held at Guantánamo has been transferred to mainland USA and tried in ordinary federal civilian court.   Over the course of the last decade, nine Guantánamo detainees have died in custody – including Yemeni national Adnan Farhan Abdul Latif in early September this year.

In October 2010 Omar Khadr was sentenced to 40 years in prison after pleading guilty to five charges under the Military Commissions Act 2009, including the “murder in violation of the law of war” of a US soldier in Afghanistan in 2002.   As part of a pre-trial plea agreement, his prison sentence was limited to eight years – and he would not receive credit for the eight years he had already spent in US custody by then. He also became eligible for transfer to Canada after 12 months, though at the time there was no guarantee that his repatriation would take place.

The courts, UN bodies and numerous NGOs including Amnesty International have repeatedly pointed to the human rights violations, including arbitrary detention and allegations of torture and other ill-treatment by Khadr, that have yet to be remedied.   His allegations of torture and other ill-treatment in US military custody are credible and troubling, and must finally be investigated impartially and effectively, Amnesty says.   Canadian officials were also found to have violated Khadr’s rights when they continued to interrogate him in Guantánamo despite the fact that his detention and treatment violated international law.

Amnesty International also calls on Canadian authorities to afford Khadr the full protections to which he is entitled under international and domestic law, and to ensure he receives appropriate rehabilitation in preparation for his eventual release.