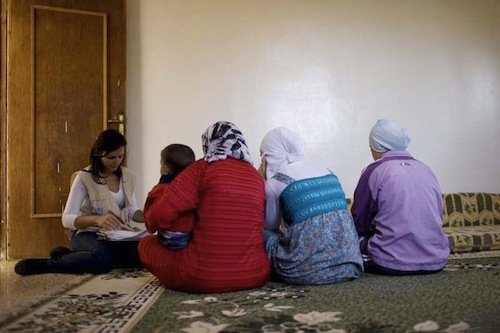 Violence and threats have forced more than 10,000 Iraqi refugees in Syria to flee the country over the past week, the United Nations refugee agency said yesterday, with the majority returning to their home country in spite of security concerns.

“Thousands of Iraqi refugees have had to relocate from the Damascus suburb of Seida Zeinab to other suburbs. Some cited direct threats to their safety, while others expressed a fear of being caught up in the violence,” the spokesperson for the Office of the UN High Commissioner for Refugees (UNHCR), Melissa Fleming, told reporters in Geneva.

Fleming said that many of the refugees have expressed fear regarding the ongoing risks to their safety in Iraq, but said they felt they have little choice given the security threats in Syria.

More than 10,000 people, mostly civilians, have been killed and tens of thousands displaced since the uprising against President Bashar al-Assad began some 16 months ago.

In addition, more than 13,000 Iraqis left Syria in the first half of this year alone, the large majority returning to Iraq, according to UNHCR. However, Iraq has recently experienced a wave of attacks that killed dozens and injured many more, increasing concerns over the security situation in the country.

The refugee agency has increased the number of staff manning hotlines in Syria, with the hotlines overloaded with calls from refugees asking for help and advice.

“Based on calls to the hotlines, we have heard that refugees are running short of food and basic needs, including cooking gas,” Fleming said. “There is a need for medical care with many clinics closed. Many refugees report continued fear for their safety, particularly the women and children.”

Fleming said the Iraqi Government is supporting the return of Iraqi refugees with dedicated flights, and UNCHR is also providing transport. For the remaining refugee population, UNCHR is offering financial assistance so families can prepare themselves in the event that access to services and shops is interrupted.

Many public facilities in Syria such as schools and parks have been turned into makeshift camps, Fleming said, hosting families which have fled the cities of Damascus and Homs, many of them having been displaced once before already.

She also noted that UNHCR’s key national partner, the Syrian Arab Red Crescent, has helped to deliver thousands of blankets, mattresses and essential household items to these areas in the past few days.

Fleming said many refugees are fleeing to other neighbouring countries, mainly Lebanon, Jordan and Turkey, which have kept their borders open to the thousands of people in need of humanitarian assistance.

“UNHCR is grateful that Jordan, Lebanon, Iraq, and Turkey maintain open borders and that Syrian refugees are being welcomed. With the rapidly deteriorating situation in Syria resulting in increased numbers of refugees, funds are urgently needed so humanitarian actors can continue to respond and deliver urgently needed lifesaving humanitarian assistance in these countries,” Fleming said. She added that the humanitarian operations supporting Syrian refugees are funded only at 26 per cent of the $192 million required.