Posted on: November 23rd, 2012 by Romana Turina No Comments 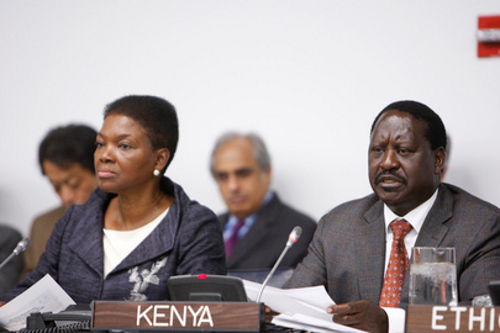 Human Rights Watch, and East and Horn of Africa Human Rights Defenders Project today expressed concern over the apparent lack of serious police investigations in the state of Kenya. The situation is even more evident when it comes to the case of violent attacks against rights activists.

Okiya Omtatah Okoiti, a prominent human rights activist, has been attacked on the evening of November 9, 2012. The executive director of Kenyans for Justice and Development (KEJUDE) Trust, a local NGO that advocates for transparency and accountability, was attacked by two unidentified men in central Nairobi. He lost six teeth and suffered serious injuries to his face and the back of his head, which required surgery. Omtatah told Human Rights Watch that the attackers demanded that he withdraw a lawsuit he filed to demand accountability in the procurement of biometric voter registration (BVR) kits because of the corruption associated with the process.

“This vicious attack was clearly meant not just to intimidate Omtatah but to seriously injure him – and perhaps even to kill him,” said Leslie Lefkow, deputy Africa director at Human Rights Watch. “The aim seems to be to stop his work on corruption in the procurement of biometric voter registration kits for the upcoming elections.”

“Omtatah has been the sole voice of concern in the problematic biometric voter kit procurement process,” said Henry Maina, director of ARTICLE 19 Eastern Africa. “The authorities need to get to the bottom of the procurement process and protect Omtatah’s right to seek the truth.”

The Independent Electoral and Boundaries Commission (IEBC) is trying to introduce biometric voter registration kits to improve the election process in Kenya, as elections in 2007 were marked by controversy and violence, resulting in more than 1,000 deaths countrywide and causing more than 600,000 people to flee their homes. However, the process has been fraught with controversy, with allegations of bribery, influence peddling, and irregularities. Last July the commission’s tender committee resigned to protest what it called external influences on the process and the IEBC.

The lowest bidder in the BVR tender, 4G Identity Solutions of India, was disqualified in August 2012. The  CEO, Sreeni Tripuraneni, said that the company was being punished for refusing to pay 30 million Kenyan shillings in bribes to senior officials in Kenya’s Foreign Affairs Ministry. In September 2012 the IEBC cancelled the tender altogether, prompting an inquiry by a parliamentary committee. The IEBC Chairman, Isaack Hassan, told the committee that his commission had come “under immense pressure from external interests” who sought to influence the tender.

After the cancellation of the tender the Kenyan government took over the procurement process amid protests from some civil society groups about possible manipulation and implications for the independence of IEBC.

“Omtatah has been keeping the IEBC on its toes and, together with others, making sure the process is transparent and fair,” Maina said. “In the end, the credibility of Kenya’s electoral process is at stake.”

“The authorities must investigate this vicious attack and bring those responsible to justice,” said Hassan Shire, executive director of East and Horn of Africa Human Rights Defenders Project. “Activists need to be able to carry their work without the fear of violent repercussions.”