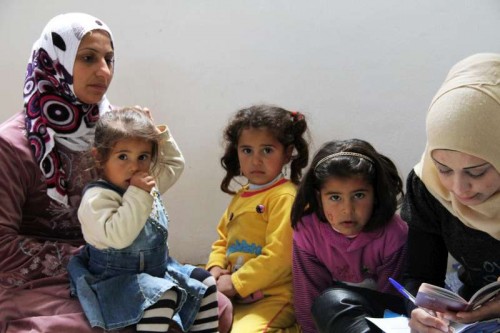 The United Nations World Food Programme (WFP) is “scaling up food assistance” to reach a quarter million people by the end of this month inside Syria with plans to double the caseload to reach 500,000 people in the coming weeks.

“As the conflict continues, Syrians in areas affected by the violence are struggling to feed their families and WFP is deeply concerned about the potential for food insecurity,” said WFP Executive Director Ertharin Cousin.

In a statement, the U.N.’s World Food Program (WFP) said that it was expanding its assistance at the request of the Syrian Arab Red Crescent and stood ready to increase its humanitarian mission in the country further “when access permits.”

U.N. aid agencies have been banned from entering Syria but a joint assessment mission carried out last month with Syrian authorities estimated that at least one million people needed humanitarian aid, reuters reports.

WFP has been providing food assistance for up to 100,000 people a month in cities such as Homs, Hama, Idleb and Damascus. It also began distributing food to Syrian refugees living in neighbouring Jordan.

WFP’s emergency operation for Syria began in August 2011 with a budget currently estimated at US$37.4 million and it is still seeking funding, as so far less than half that amount has been secured.

More than 9,000 people have died in Syria in 13 months of fighting sparked by a popular uprising against President Bashar al-Assad. The U.N. Security Council approved on Saturday the deployment of up to 300 unarmed military observers to monitor a ceasefire which remains “incomplete” according to Secretary-Genral, Ban Ki Moon.

Nearly 60 people were killed on Monday in violence across Syria, the majority of them civilians in the central city of Hama, according to the Syrian Local Coordination Committee, on Tuesday.