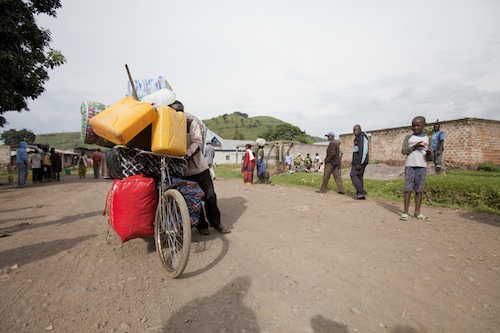 As Ugandan traders take advantage of emerging markets like the newly independent state of South Sudan and neighboring Democratic Republic of Congo, farmers like Hajji Naleba have seen their profit margins increase.

Naleba is a rice farmer in the Eastern District of Butaleja in Uganda. He has been growing rice since 1982 at his Lwoba irrigation farm in Masulula village.

“We started with low production,” Naleba says. “Now we are reaching 1.2 tons per acre.”

According to Naleba, the last few years have seen high demand from Sudan. “There’s no rice in Sudan, so this is an opportunity to harness,” he says.

A new report from the World Bank shows how, in addition to produce, this “Pearl of Africa” can export manufactured goods to the region, as well as services like education, tourism and even transit. But, it says, transport and logistics, and non-tariff barriers remain a hefty challenge.

International experience suggests that it is hard for a small landlocked country like Uganda to move alone along the path to economic development. That is the challenge the country faces today, a challenge the World Bank and its government partners are seeking to address in the new Uganda Economic Update, the first in a series of bi-annual reports taking stock of the country’s economy. The report identifies challenges and proposes solutions to facilitate inclusive and healthy growth.

The new study suggests Uganda can earn an additional US$2.5 billion from non-traditional trading partners in the region, and close the trade deficit in the next five years, if it removes trade barriers with neighbors. Other messages;

- To maximize its trade potential, Uganda must look beyond the East African Community (EAC) to all of Sub-Saharan Africa

- To unleash the potential of service exports, Uganda should eliminate restrictions in the strategic sectors of tourism, transport and logistics, and education and professional services

The country has performed well over the past two decades, the report says, brushing aside one of the world’s highest population growth rates, to record an impressive seven percent average gross domestic product (GDP) growth, and halving the number of people living in abject poverty from 56% of the population in 1992 to 24% in 2010.

Uganda’s economy has recently faced major challenges. Economic growth slowed to 3.4% and inflation soared and remained at double-digit levels under shocks for most of 2011 and 2012. This contrasted recovery of other economies in the region.

As stability returns, the economic outlook is positive, the report says. Growth will turn around as constraints abate and begin to raise the country’s growth potential, but the key vulnerability remains as Uganda continues to export far less than it imports.

A glimpse of hope to address these vulnerabilities is in regional trade.

According to Julius Onen, Permanent Secretary in the Ministry of Trade, Uganda has not suffered a significant decline in its trade because over 45% of the country’s commerce is within the regional market, EAC and COMESA, and the demand for the country’s products is fairly steady.

“Uganda’s strategic location at the hub of The Great Lakes region, gives it a comparative advantage in terms of moving heavy goods to the market,” says Onen. “This has also resulted into Uganda attracting investments from the region, particularly Kenya, which feels it has to be nearer to markets like DRC and Sudan.

Uganda has a comparative advantage in the trade of fruits, vegetables juices, grains and cereals, as compared to other countries in the region, but fortunes have been good and bad, according to Godfrey Ssali the Policy and Advocacy Officer of the Uganda Manufacturers Association.

“Good fortunes in that there has been growing demand from South Sudan and DRC,” Ssali says. “In the last 4 to 5 years the two destinations have been good trading partners for Uganda actually overtaking Kenya. The bad fortunes being the civil war and civil strife in South Sudan and DR Congo.”

Musa Waswa, a Ugandan businessman, frequently travels on Gulu-Nimule road from Kampala to Juba, a 24-hour journey that serves as a clear example of how trade can be improved.

“On two occasions, my truck full of fruits and vegetables has overturned along Gulu-Nimule Road,” says Waswa. “My truck overturned when I hit a pothole, the produce covered (blocked) the road. It took me almost three days to get out of there. By then all my fruits had either gone bad or were stolen.”

According to the Uganda Economic Update, Uganda must look beyond poor maintenance of roads and explore the cheaper railway and water transport options that are almost non-existent. Rail and water transport currently cater for only 10 percent of Uganda’s trade.

A plausible solution, Ssali adds, is for Uganda to better use the waterways through Kisumu, Mwanza, Portbell and Bukakata in Masaka, which would reduce traffic on the roads.

For small farmers like Hajji, his prosperity and that of future generations depend on it.