Posted on: October 16th, 2013 by Tina Michalitsis No Comments 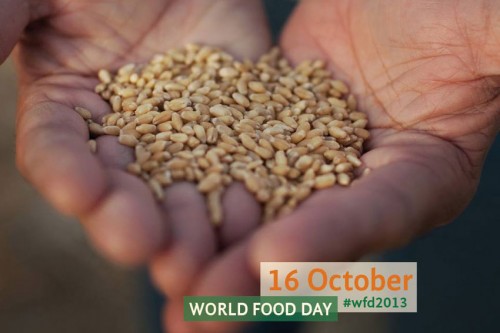 “The key to better nutrition, and ultimately to ensuring each person’s right to food, lies in better food systems – smarter approaches, policies and investments encompassing the environment, people, institutions and processes by which agricultural products are produced, processed and brought to consumers in a sustainable manner,” Secretary-General Ban Ki-moon said in his message for the Day.

“Every day, more than 840 million people go hungry in a world of plenty. This fact alone should be cause for moral outrage and concerted action.”

The theme of this year’s Day, which is celebrated on 16 October in honour of the date of the founding of the UN Food and Agriculture Organization (FAO) in 1945, is “Sustainable Food Systems for Food Security and Nutrition.”

A food system is made up of the environment, people, institutions and processes by which agricultural products are produced, processed and brought to consumers. Every aspect of the food system has an effect on the final availability and accessibility of diverse, nutritious foods – and therefore on consumers’ ability to choose healthy diets. However, policies and interventions on food systems are rarely designed with nutrition as their primary objective.

“Addressing malnutrition requires integrated action and complementary interventions in agriculture and the food system, in natural resource management, in public health and education, and in broader policy domains,” FAO said.

The World Food Programme (WFP) stressed that understanding food systems and ending malnutrition can transform individuals, societies and economies, and is central to all development efforts.

In addition to the 840 million people suffering from chronic hunger, there are some 2 billion people who lack the vitamins and minerals needed to live healthy lives. Poor nutrition also means some 1.4 billion people are overweight, with about one-third obese and at risk of coronary heart disease, diabetes or other health problems.

WFP noted that if the global community invested $1.2 billion per year for five years on reducing micronutrient deficiencies, the benefits in better health, fewer child deaths and increased future earnings would generate gains worth $15.3 billion.

The Executive Secretary of the UN Framework Convention on Climate Change (UNFCCC), Christiana Figueres stressed that food systems are closely linked to climate change as the latter is making it harder to feed a growing population.

“Aside from permanent shifts in climatic conditions which will affect farming, climate change is causing more and more extreme weather, for example tropical storms, floods and droughts which can push subsistence farmers and others living in food insecurity into dire circumstances,” she said.

“If we are to sustainably feed the world’s population in the future we need to see action today that prepares farmers around the world for the impacts of climate change.”

To mark the Day, FAO will be holding events all week at its headquarters in Rome and around the world on the importance of food systems for food security and nutrition.

Today it will hold a plenary hall with various UN agency officials as well as a high-level seminar on global food losses and waste, and on Thursday a special ceremony will be held to mark the culmination of the International Year of Quinoa, with Nadine Heredia Alarcón de Humala, First Lady of Peru and Special Ambassador for the Year in attendance.

On Sunday FAO will hold the Hunger Run 2013 in central Rome, a 10 kilometre competitive run and a five kilometre non-competitive run/walk to raise funds an anti-hunger field project in the Northern State of Sudan.